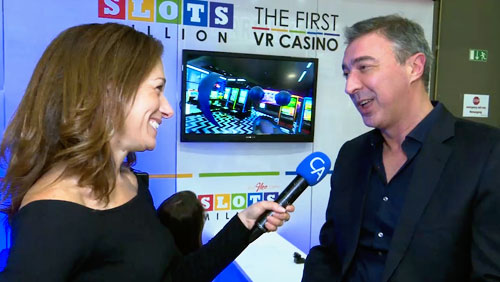 In this interview with CalvinAyre.com’s Becky Liggero, Alexandre Tomic of Slots Million tells us why gambling operators should invest in Virtual Reality right now.

Who would have thought that mobile phones will be one of the necessary gambling tools at present?

Back then, a standard mobile phone is only used to communicate with people minus the hassle of being tied into a cord. Thanks to the advancement of technology, the handy phones we have in our pockets have evolved into more than just a communication device.

People now use mobile phones to conduct research for projects and shoot and edit production videos in real-time. In the world of gambling, many players embrace the use of mobile phones in wagering due to practicality and the comfort it provides.

Alexandre Tomic of Slots Million, however, believe that mobile gambling will soon become a thing of the past as the world gears to virtual reality.

While he doesn’t see business opportunities for virtual reality at present, Tomic said that it’s best for operators to start investing into the latest technology.

“VR (virtual reality) is going to be the mobile of tomorrow. So buy domains now, build content now. Be there now. Don’t come there when all the crowd is going to be there and you are going to be the last one,” Tomic told CalvinAyre.com. “We can’t see that there’s a market, we can’t say there’s a market now, I’m not sure if we are going to see a market before two to three years. But if you start investing in VR now, if you start communicating about VR now, you are ahead of the curve, you start going into a mindset that you will need to build this new experience and you’ll get a lot of PR.”

Tomic said the first virtual reality was invented in the 19th century and was known as stereoscopic photography. The device uses two different cameras, which allows the user to see the depths and dimension of the object.

“We see the first device in the early 90s but we didn’t have internet, we didn’t have the power behind to be able to create environments and put people together in VR. And it just came two years ago, so we started becoming interested in VR two years ago,” he said. “We built the first casino one year ago, and today, we see everybody jumping there. I mean Facebook is jumping there, it bought Oculus, Samsung is investing there. So we see that it is coming right now. I’m not able to tell you that 2017 is going to be the year of virtual reality or 2018, but we are about to see it. “