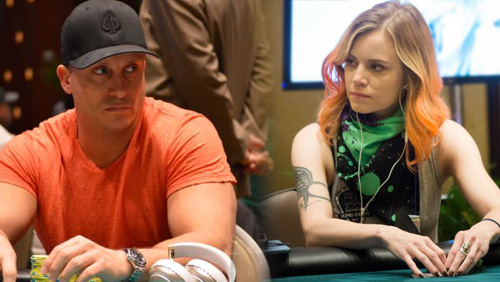 Cate Hall and Mike Dentale have managed to turn an ugly slanging match on Twitter into a live heads-up battle with £30,000 up for grabs, and the whole thing will be streamed live and broadcast on TV by Poker Night in America.

According to Mike Dentale, Cate Hall is a slut, a tramp and a crack head. Allegations surfaced on one of many tweets flying back and fore between the pair like the imaginary nuclear warheads that Kim Jong-un sends to Donald during his dreams.

There were poker players all over the world shouting Fight! Fight! Fight! Prompting Matt Glantz to declare that Dec 8 must go down as the ‘greatest poker Twitter day of all time.’

So how did it all kick off?

Teaching about the art of story during his book Nobody Wants to Read Your Sh*t,  the author, Steven Pressfield, impresses the importance of The Inciting Incident calling it ‘the moment the story starts.’

Dentale called Cate Hall a shit poker player, but all that was mere back story. The inciting incident in this epic tale began when Hall reacted by telling him that he ‘does a lot of talking’ before challenging him to a heads-up match ‘tonight or any other time.’

I heard @catehall has been playing well. Funny when the cards don’t go your way you have to rely on skill.

Dentale didn’t accept her challenge immediately. Instead, taking the opportunity to hurl some abuse at Hall, declaring she is ‘a horror,’ ‘easy game,’ and when tested, is ‘clueless.’

The pair went back and forth about a potential match. A spectator wanted to know why Hall was getting involved in a ‘pissing match’, and she responded ‘I’m just trying to make a living and I know a profitable opportunity when I see one.’

It’s at this point that they both realise that they are at opposite ends of the world and wouldn’t resolve their ‘pissing contest’ that day.

The war of attrition didn’t end.

Dentale ripped the piss out of Hall for calling a four-bet jam by Barry Hutter with ATo in the $10k buy-in WPT Five Diamond Classic after a 10-minute tank holding 80bb. Hall replies by calling Dentale a ‘bitch.’

Dentale reacts by calling her game ‘atrocious’ and says he isn’t interested in playing for money, he wants her to stop tweeting about politics. Hall reminds him that ‘real-life poker players’ play for real money.

By this time everyone stops reading about the usual crap people like me write about, grab some popcorn and join in the thread. One spectator points out that he would buy a ticket to watch them both compete and Matt Glantz decides to make it happen.

Glantz organises for the pair to compete in a best of three 25/50 cash games. Poker Night in America (PNIA) agree to stream the action live via Twitch and also broadcast the highlights on TV. The match will take place sometime in March. Doug Polk and David Tuchman will call the action.

@catehall@Mikunbelievable@TuckonSports@MattGlantz. Well what the Hell we might as well film it and televise it @PokerNightTV

Hall tells everyone who hates her ATo move that they can all ‘GFY,’ and calls Dentale ‘a pathetic scumbag,’ before finally realising that the entire diatribe between the pair is also pathetic.

It’s at this time Dentale calls Hall a cunt, a crackhead, a slut and a tramp.

What would her mother think?

We know what her mother thinks because she sent Hall a text which also ended up on Twitter.

“I wish you would quit engaging in shitstorms with morons.”

If you prefer to watch a video recording of the entire affair, click here.