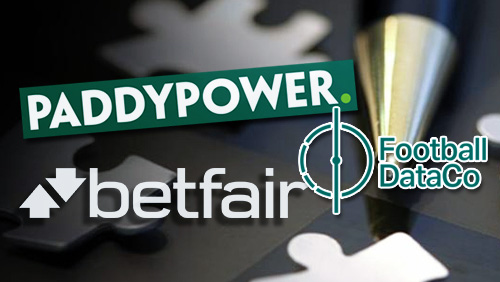 Paddy Power Betfair (PPB) is the latest betting operator to agree a data usage licence with Football DataCo, joining the likes of bet365, BetFred, and William Hill, who already have licences.

The long-term agreement allows PPB to use matchday data for all Premier League, EFL and SPFL matches across its digital channels and UK and Irish retail estates.

The agreement coincides with Football DataCo celebrating its 15th birthday and launching a new corporate identity. The new logo (as above) visualises the idea of both football and data in a simple icon and reflects our values as a premium data provider for some of the world’s most exciting football leagues.

Adrian Ford, General Manager of Football DataCo, said “British football continues to be a vital component for all betting businesses, both land based and digital. There is growing acceptance that Football DataCo’s market leading product is protected by IP rights and a data usage licence is required to use it, as demonstrated by this deal. Football DataCo is going from strength to strength”

Football DataCo was formed in 2001 by the professional football leagues in England and Scotland to protect, market and commercialise their official match related data.

Working with the Premier League, EFL, SPFL and a series of partners, Football DataCo oversees the collection, management and distribution of the League’s official event and performance data worldwide. Football DataCo also protects the copyright of Premier League and EFL still action images, and runs the online media accreditation tool for journalists and photographers to apply to attend their matches.

The data collected on behalf of Football DataCo is protected by intellectual property rights. These rights include sui generis database right (derived from the EU Database Directive) as confirmed by the UK Court of Appeal in 2013. For further information please see case reference [2013] EWCA Civ 27.