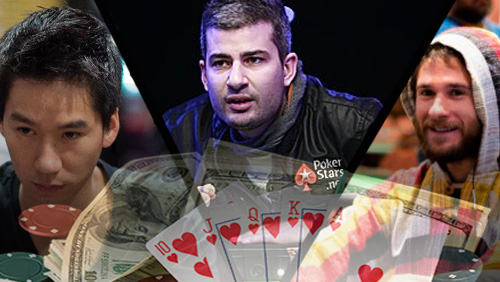 Like ElkY (who was a pro StarCraft player before poker), Lew was also a pro gamer before finding a more enriching monetary reward in poker. Lew used to make a living playing fighting games such as Marvel v Capcom 2.

The similarities extend further. Not only are they both former eSports pros who found poker, and who represent the largest online poker room in the world, but they are both in the Guinness Book of Records for their performances in poker.

Lew’s performances on the felt have seen him earn over $2.6m playing online at PokerStars and $1.1m live. All that remains is to learn how to make a decent introductory video.

Jose ‘Nacho’ Barbero is a former teammate of Lew and Grospellier before PokerStars let him go in 2014, and he has just set an unbreakable record in South America.

Barbero has become the only player to win three Latin American Poker Tour (LAPT) Main Events after winning the final event in Sao Paulo Brazil. Barbero defeated 329 entrants to capture the first prize of R$341,182 ($98,000) and told the PokerStars blog that the victory ‘just had to happen.’

Both of Barbero’s LAPT Main Event wins came in 2010. His first came when he defeated 307 entrants to win the $279,330 first prize in Punte del Este. He became a two-time champion after defeating 384 competitors in Lima to take the $250,000 first prize.

Barbero knows his record will remain intact because PokerStars have dismantled the LAPT to make way for the PokerStars Championships & Festivals – the first of which begins in the Bahamas in January.

Barbero has amassed over $3.1m in live tournament earnings, half of which came in that incredible year in 2010, including a $870,082 prize after winning the £20,500 High Roller at the European Poker Tour (EPT) Main Event in London.

The largest score of the week ended up in the pocket of Patrick Mahoney. Competing at the Rock n Roll Poker Open at the Seminole Hard Rock in Florida, Mahoney won the $3,500 Main Event for $564,227.

The event attracted 760 entrants, and the win was Mahoney’s largest of his career to date. His previous highest score was $113,208 after finishing fifth in a World Poker Tour (WPT) Main Event all the way back in Season 9. He is also a previous Australia & New Zealand Poker Tour (ANZPT) Main Event winner and a Latin America Poker Tour (LAPT) Main Event runner-up.

Joining Mahoney on the final table by the likes of Upeshka Desilva (3rd) and Ari Engel (9th). The event surpassed the $2m guarantee by over $400,000.