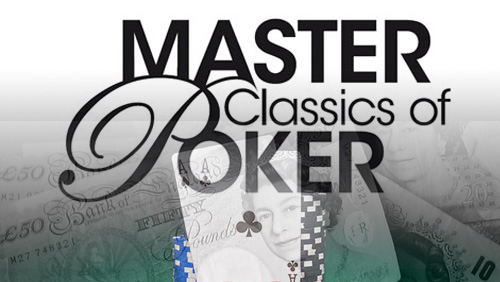 One of the most celebrated and prestigious events on the European live tournament calendar has come to a close with Hakim Zoufri and Noah Boeken winning the two main titles.

The Master Classics of Poker (MCOP) in Amsterdam has been rocking and rolling since 1992. Former winners of the MCOP Main Event include Surinder Sunar, Ram Vaswani, Ole Schemion, Noah Boeken, and Ruben Visser.

Joining that elite list is Hakim Zoufri who defeated Fabio Sperling in heads-up action to take the title and first prize worth €275,608. Before the MCOP event, Zoufri was relatively unknown amongst the headlines of the poker media. A €30,340 cash in a €5,200 Turbo event at the European Poker Tour (EPT) Barcelona festival was his previous highest cash.

MCOP Main Events between 2004-13 carried a €5,000 or €6,000 buy-in before flagging attendances resulted in the price moving down to €4,000. The event attracted 356 players amongst which were the previously mentioned Fabio Sperling (2nd), the experienced Juha Helppi (4th), and the young British hot shot Charlie Carrel (9th).

Juice bar owner Noah Boeken doesn’t play many live tournaments these days, but he once again proved that the greatest players never forget the tools of their trade with victory in the MCOP €10,250 High Roller.

It was another excellent performance for Carrel. The British pro, who has made a startling transformation from online grinder to live high stakes tournament pro, also made the final table of the Main Event (see above) finishing ninth.