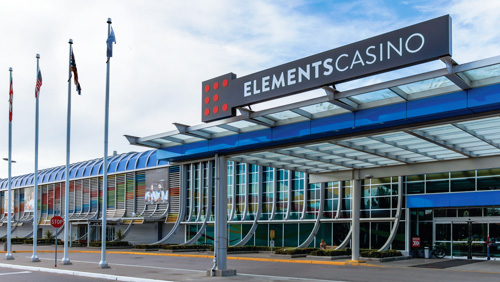 Surrey, BC (November 2016) – Elements Casino is proud to announce that it will be the first casino & racetrack in Canada to host and co-present the inaugural eSports Street Fighter V Tournament on Saturday, Dec. 3, 2016.

The event will officially launch the Grand Opening of the Elements eSports Lounge, home to all future eSports activities, tournaments and events in British Columbia. eSports is commonly known as electronic sports or competitive video gaming that is played by individuals, teams or professionals and is often accompanied by a large viewing audience. There are five key genres that make up the bulk of video games that are often referred to as eSports: first-person-shooter (FPS), real-time strategy (RTS), multiplayer online battle arena (MOBA), fighting games and sports simulation.

“We are absolutely thrilled about this opportunity and ecstatic to be the first casino in Canada to welcome and embrace the eSports culture. I am confident that our dedicated Elements eSports Lounge will deliver an additional entertainment experience for our guests who are seeking another form of leisure or activity,” said Michael Kim, General Manager, Elements Casino.

Elements Casino has partnered with Spawn Point to present the upcoming Street Fighter V Tournament with the prize pool of $1,500. Spawn Point provides a full range of solutions for the burgeoning eSports industry.

“eSports has the ability to attract and entertain an entirely new demographic of casino players,” said Kevin Mercuri, co-founder of Spawn Point. “The opportunity to help introduce eSports to Canadian gaming is a-once-in-a career opportunity for the Spawn Point team. We are glad to play a key role alongside Elements Casino.”

According to the latest research on eSports, it is projected that there will be 145 million eSports enthusiasts worldwide in 2017. Research has also indicated that there are nearly as many eSports participants (89 million) as hockey fans (94 million). The growth and development of eSports has been substantial as the total eSports revenue for 2016 is projected to be $275 million in North America.

Elements eSports Lounge is a 19+ facility and admission is free.

For more details about the Grand Opening of the Elements eSports Lounge and the upcoming Street Fighter V Tournament, please visit elementscasino.com/eSports or follow @eSportsElements on Twitter.

Great Canadian Gaming Corporation is a Canadian-based company that operates gaming, entertainment and hospitality facilities in British Columbia, Ontario, New Brunswick, Nova Scotia and Washington State. The Company has 21 gaming properties which consists of thirteen casinos, including a four-Diamond resort hotel in Richmond, British Columbia and a four-star hotel in Moncton, New Brunswick, four horse racetrack casinos, three community gaming centres and one commercial bingo hall. A key element of Great Canadian’s business model is its commitment to social responsibility. “PROUD of our people, our business, our community” is Great Canadian’s brand that unifies the company’s community, volunteering and social responsibility efforts. Under the PROUD program, Great Canadian annually invests over $2.5 million in our communities and in 2015, over 3,600 charitable organizations were supported by Great Canadian. In each Canadian gaming jurisdiction, a significant portion of gross gaming revenue from gaming facilities is retained by our crown partners on behalf of their provincial government for the purpose of supporting programs such as healthcare, education and social services.

Spawn Point provides a full range of solutions for the burgeoning eSports industry. Specializing in creating advanced competitive environments, The Spawn Point eSports tournament platform is built on the AliQuantum gaming platform – a recognized leader in gaming software with the regulated integrity of a licensed gaming platform. The Company provides hard-to-find expertise in the creation of eSports spaces as well as planning and producing eSports tournaments. The Spawn Point team is comprised of industry veterans who specialize in eSports infrastructure, technology, gaming software and promotion – www.spawn.pt.