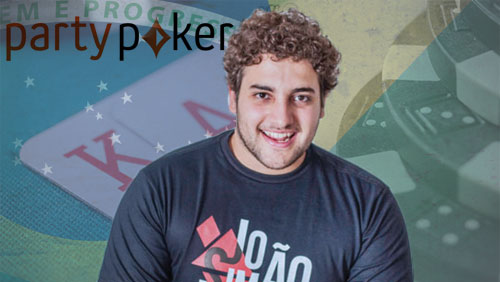 Partypoker has hired Joao Simao to be their new face of the brand in Brazil and will wear the patch at the upcoming World Series of Poker Circuit (WSOPC) event in his home country and the partypoker Caribbean Poker Party.

The Brazilian poker market is one of the largest and most vibrant in the world. It’s the reason that PokerStars has Andre Akkari and Neymar on the books. It’s the reason why 888Poker does business with Nicolau Villa-Lobos, Bruno Politano, and Denilson, and it’s the reason partypoker has signed Joao ‘joaosimaobh’ Simao.

Simao has built a fearsome reputation playing tournaments online with over $4.5m recorded on his PocketFives profile. His highest online score to date was $167,420 earned playing in the $1,050 buy-in Mountain Series on PokerStars. $3.3m of his entire online earnings have come from his play at the tables of the Red Spade.

In addition to his online winnings Simao has earned over half a million dollars playing live tournaments. PokerStars Caribbean Adventure (PCA) and Brazilian Series of Poker (BSOP) side events victories are amongst his major titles as well as a 20th place finish in the 2015 European Poker Tour (EPT) Grand Final in Monte Carlo.

The former Brazilian #2 ranked online poker player will wear the partypoker patch at the inaugural World Series of Poker Circuit (WSOPC) event in Sao Paulo, on October 26, before flying to the Caribbean to compete in the Caribbean Poker Party.

As part of the deal, partypoker has also agreed on terms to partner with the Massari Poker School, where Simao has a coaching role. The school, which offers training for players throughout Brazil, will use the partypoker software.

In February, partypoker re-entered 21 online gambling markets after GVC Holdings acquired them. The markets were closed by the previous owners Bwin, back in April 2013. Amongst those markets was Brazil.