With William Hill and Amaya next in line for merger rumors, the first question to ask is, Is this a merger for the sake of merging, or does it actually make sense? The other questions:  Will it actually happen? Is either Amaya or William Hill a Buy now? First impressions, it doesn’t look like the proposed merger is solely for the sake of merging, but that seems to be at least some part of it because that is the current atmosphere in the UK gaming market. There is some sense to it, but it’s not a very compelling and obvious case. Will it actually happen? I’d say the chances are 55-45 yes, depending on whether or not an $870 million fine on PokerStars is enforced. More on that later. Is either Amaya or William Hill a Buy now? Amaya no, absolutely not. Sell it now. William Hill is safer to buy on a gamble that the deal goes through, but it’s not that great a position to take. 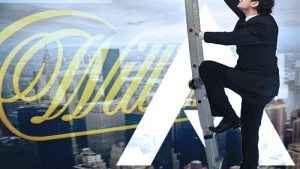 We took a 5% position in Amaya for the model portfolio way back in February at $13.28 a Nasdaq share on a positive Super Bowl betting indicator and speculation that David Baazov would take the firm private for C$21 a share. That didn’t happen but effectively the same thing happened and we are now at C$23.4 or $16.12 on the Nasdaq. That’s a 21.4% gain on a 5% position for a total portfolio gain of 1.1%. It’s time to sell and move on. The risk that this deal will not go through for whatever reason is high enough not to endanger gains already made.

Secondarily, this issue doesn’t come up often, but from a logistical standpoint for US Amaya Nasdaq shareholders and Canadian shareholders on the TSE, holding Amaya now would be difficult practically. If the deal goes through, William Hill would be the surviving entity and trade on the London exchange, and US and Canadian shareholders (or any non UK shareholder) whose brokerages do not support international exchanges would be stuck either converting to the very low liquidity OTC shares WIMHY or WIMHF which is not even an option for some specialized accounts that forbid OTC securities, or being forced to cash out anyway, or who knows what. So might as well sell now while you can.

As for the deal itself, there are two compelling features to it. The biggest is the cross-selling opportunities for Hill, a firm that has been struggling mightily with its online growth. Having access to PokerStars clients would beef up digital efforts, at least temporarily at the beginning. After that it depends on customer retention, something that is not assured. Secondly, it looks like Amaya CEO Rafi Ashkenazi would take over the helm, and William Hill could use some fresh new blood at the top. Can he provide the direction needed? Hard to know, but it would be difficult to do worse.

Some unflattering numbers to keep in mind for Hill are that Italy and Spain wagering is up 22%, but despite that the firm showed a 1% loss in volume. Imagine what happens when those two markets fall, and they will when the next banking and sovereign debt episode flares up. Employee and marketing costs are up 13% and 12% respectively, so Hill is losing efficiency. New accounts are down 17% and average cost per acquisition is up 35%. No doubt a merger would help with average cost per acquisition and bringing up new accounts. Markets know this, so if the merger talks break up, William Hill could be hit hard.

There are numerous other risks here. For one, Theresa May or May Not trigger Brexit in March. I’m betting she won’t because her announcement that she would do so came on the heels of criticism from inside her own party that she’s dallying, which is very reactionary and weak. If she were committed she would have done something before being publicly shamed from within. But even if she does trigger Article 50, it would be from a position of weakness and she seems a big government type and would likely raise taxes and regulations. No Margaret Thatcher Iron Lady this one.

As for the deal going through, there is no assurance of that at all. Most investors get their news second hand and don’t go through the primary sources themselves, so all they know is what other sites say about the actual release from William Hill. Here’s the key paragraph from the primary source (emphasis added):

“The potential merger would be classified as a reverse takeover under the Listing Rules of the Financial Conduct Authority and is not subject to the City Code on Takeovers and Mergers. William Hill is required to provide certain confirmations to ensure that there is sufficient information available to the public with regard to the potential reverse takeover in order to avoid a suspension of William Hill’s shares.”

Basically, media started speculating and Hill had to confirm the talks just for the sake of regulations. It’s not like they excitedly reported this on their own. Still, it does look slightly better than 50-50 because Hill needs a shot in the arm and if it loses this one, shareholders could start to despair. One indication to watch would be for insider selling at either Amaya or William Hill in the next few weeks. If we see any significant amount of that, then the talks may not be going very well. If we don’t, then it looks okay.

Outside issues include an $870 million fine against PokerStars issued by some US judge for breaking (*gasp*) some regulation or other. We’ll see this more and more as the US passes $20 trillion in debt. Government agencies will be looking for more and more ways to set up impossible regulatory minefields and hope a big company hits a mine and then they can take a lot of money in the name of “justice”. The European Union is doing this with Apple, stealing billions. The US “Department of Justice” is doing it with Deutsche Bank, also demanding billions. Now Amaya…there will be others. And Amaya cannot afford to simply give away close to a billion dollars. They’re not a central bank. They actually have to earn money and can’t just print it and hand it to a judge.

The combined debt of the company does not look all that bad. Hill has £675 million in debt and Amaya $2.45 billion, totaling about $3.3 billion. The combined market cap would be around $5.62 billion at current valuations for 58% leverage, not great but not terrible. The debt will be an issue eventually, but it’s not enough right now to stop the deal. The biggest risk to the deal is the potential Amaya fine, and chances are high enough that the deal won’t go through to stay away from both these stocks and sell Amaya.