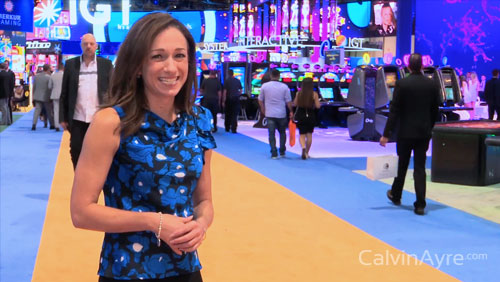 CalvinAyre.com returned to the Sands Expo in Las Vegas for the final day of G2E 2016, always the quietest day on the expo floor but not necessarily the dullest. Today we came across plenty of food, drink, models, loud music, zombies, huge virtual reality displays and our personal favorite, an Alan look-alike from the infamous Vegas-based Hangover movie.

We spoke with Michele Spiteri of All-In Translations who flew in “Alan” to join her team for the second year in a row at G2E, a wonderful PR stunt as plenty of delegates were excited to take photos with the Hangover star, including us.

The Down Under Blackjack booth caught our attention today with all its Aussie paraphernalia, including a stuffed kangaroo, koala bear and a CEO decked out in outback/safari gear.

Down Under Blackjack CEO Kyle Morris walked us through his innovative twist on blackjack, a version of the game that lets players see the strength of the dealer’s hand before they decide how to play their own hand. Before players place any bets, the dealer must identify their hole card as small, medium or large (small=2,3,4 or 5, medium=6,7,8 or 9, large=10, J, Q, K or A) and this information allows players to make more informed decisions. Morris has plans to distribute the game to land based casinos and also online in the future and confirmed the reception of the game was overwhelmingly positive at G2E 2016.

Dana Takrudtong of GAN designed a new, cutting-edge booth for this year’s G2E after a huge 2016 so far with the launch of several one billion plus social gaming solutions in the gaming space including Jack Entertainment, MGM, Isle of Capri, the Chicksaw Nation and several others that were announced at G2E 2016.

One of the announcements included GAN’s partnership with Station Casinos in Nevada to launch social gaming solution “Simulated Gaming” in early 2017. With this enterprise-grade solution in place, Station Casinos will be able to engage customers with a host of entertainment and marketing communication tools across their 19 properties.

GAN’s second G2E announcement was its extended partnership with an existing major US casino operator to launch a real money site and mobile app in Europe and other regulated markets in early 2017. This deal will mark GAN’s first overseas deal with an existing US casino client.

Victor Rocha has been a loyal G2E exhibitor for years with Pechanga.net but this year he revealed his new venture, Victor-Strategies, at the show. Rocha told CalvinAyre.com Victor-Strategies, or V-S, is a consultancy firm providing services to the gaming industry with a focus on Indian Country. V-S will also produce conferences for industry leaders interested in current issues in Indian Country.

At the conclusion of the event, we had the opportunity to speak with AGA President Geoff Freeman to get his thoughts on how this year’s G2E went from his perspective. Freeman said this was his fourth G2E as AGA President and he feels this was the most successful instalment yet based on his observations and the feedback he received from his members and other delegates.

Freeman said close to 25,000 people registered for G2E this year and the vibe throughout the four days of the show was strong and reflected these healthy numbers. He elaborated on the success of his panel discussion with former NBA Commissioner David Stern confirming the NBA and other leagues are finally starting to see the benefits of regulating sports betting across America and Freeman is confident we’ll start seeing some movement soon.

Naturally the presidential election was a topic of discussion during G2E as the first Trump/Clinton debate took place while the show was on, but Freeman doesn’t think the election of either candidate will greatly effect the gaming industry which has a strong foundation and is truly on the rise in Las Vegas and beyond.