September  2016, Budapest – The organizers would like to thank each delegate for honoring us with their presence and we are certain that it is going to be memorable event despite the happenings that enfolded during the day. 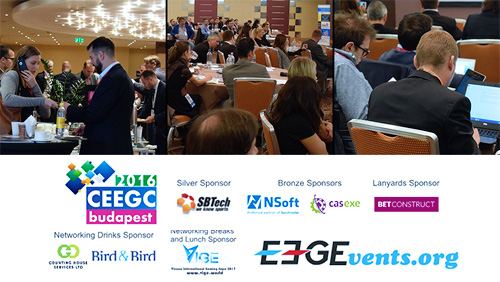 Ms. Mirjana Acimovic (President @ the first Serbian representative association of gaming industry JAKTA) gave an informational presentation about the current legislative situation of the Serbian online gaming market where she shared the updates and the outcomes which will be discussed during the 2017 – 2018 season. The Power Point presentation will be available shortly and each delegate will be notified by its upload and availability.

The panel in which Ms. Acimovic gave speech was moderated by Rita Gyaraki (GamblingCompliance) and also included the presentation of STJEPKO ČORDAŠ (CEO @ NSoft), who gave light upon the current status of the online gaming market in Bosnia and Herzegovina.

“The Balkans panel was of a vital importance and will be a topic which will be discussed in even more details during our next conferences.” stated the Mr. Zoltan Tundik, founder of EEGMedia/EEGaming, who are the organizers of CEEGC.

The panel was moderated by MIHNEA PAUL POPESCU-GRISOGONO (Founder and President @ Casino Life & Business Magazine) and the first speech was held by Ms. Nadya Hambach(Head of Entertainment and Gaming Law Department @ Velchev & Co. Law Office), who gave an official overview of the Bulgarian online gambling market explaining the recent updates to the legislation and addressed an open invitation for operators that are seeking to enter the market legally.

Ms. Nadya Hambach’s speech was followed by the Mr. Jan Rehola’s (Lawyer and indenpendent consultant @ BetOnSkill Consulting) presentation, who is known to give all the deep, detailed information about the Czech Republic’s regulatory updates. The presentation was mostly awaited by the delegates since the Czech Republic is going to open its doors for remote gaming operators, who seek to operate legally in the Czech Republic, starting from 01.01.2017. As a matter of fact, Mr. Jan Rehola also mentioned the fact that some operators have already started to application process and the Czech Republic will be a success story for the online gambling industry in Eastern Europe.

The presentation was followed by an overview of the online gambling market in Ukraine, which was presented by Ms. Iryna Sergienko (CEO @ the Ukrainian Association of Gambling Industry), who gave some extraordinary inside information about how operators should be looking and approach the market.

The final presentation was given by Ms. Odeta Nestor (President @ The National Office for Gambling in Romania), who pointed out the importance of the online gambling market in Romania and its success that has been growing since the debut of the new gambling law.

While Ms. Odeta Nestor answered all the questions that were coming from the audience, one question still remained unanswered. A questions which was addressed by one of the LeoVegas delegates which was present during the event. However, the question which hasn’t even finalized by its author, was interrupted by an announcement which came via the speakers that were installed in the conference room and surprised everyone present in the conference room. The announcement was regarding all staff, delegates and visitors of the Hilton Budapest City Hotel to evacuate the hotel immediately in an orderly manner since a bomb threat situation has been issued by the Hungarian National Security.

The delegates have found the exit of the hotel surrounded by police and special forces, equipped with trackers, dogs and police gear.

The situation was uncertain at the moment of the announcement which came at around 11:15, just in the period in which the first Networking Coffee Break was scheduled.

Most of the information that was given to the organizers and the delegates was blurry since the authorities that were protecting the entrance of the hotel, haven’t been co-operating in a clear manner in which the outcome of the threat would be prolonged until the afternoon or even further after that.

This is when the open mind of the individuals and professionals that work in the online gambling industry has kicked in and automatically suggested a one-off a kind networking session which was present in the subconscious each and every one of them. Some started discussing business and the ice-breaker for each introduction was dissolved by the fact that everyone had an interest to know what the other person knows about the outcome of the unplanned break and wonder if it is a real threat or just a fake phone call.

Despite the ongoing threat or should we call it bomb scare situation, the delegates were having fun and networking on a whole new level, a habitat in which they’ve found to discuss the essence of the situation and connected new friendships.

The messages are countless and some even went Live on Facebook, telling their colleagues and partners about the situation.

Paul Reilly(MediaSkunkWorks) posted that “It worked out mint.. Everyone is loving it. It’s brought people together in a way that cannot be done in a standard networking event.”

However, after almost 4 hours of conference pause, during which the organizers have been questioned by the Hungarian National Security representatives that were present during the search, we have been informed that a suspect package has been found in the Hotel and that I will investigated if it is explosive or just been the subject of a scare.

The conference resumed at 15:15 in a shorter version, where we had to pick the panels that were ready and could be held without delays. Thus, decided to cancel the Hot topics of the online gaming market in Central Europe and the Upcoming Events panels. We have taken this decision which has received a negative feedback from the up to 3% of the delegates that have expressed their comments right after the conference ended.

The resuming of the conference started with the announcement of the changes and continued with the first presentation of the afternoon after the bomb scare got cleared. The presentation was short, yet full of vital information, and was presented in an original way by Mr. Paul Reilly (Founder and CEO @ Media Skunk Works A.I. Laboratory). The presentation was taken by interest by the audience which found all the right hand information of what there is to know about the importance using A.I. for search optimization and the ongoing battle with the search engine giant called Google.

Mr. Paul Reilly strived in performance and managed to squeeze its 40 minute presentation into a 15 minute briefing as instructed in order to give the chance for all speakers of the Hot topics of the online gambling market in the Europe Union to speak about the trends that are rising, The importance of a quality Customer Support (with Mr. Vahe Baloulian – BetConstruct), The impact/results of In-Play betting on Euro 2016 and the importance of being present in emerging markets (with Mr. Tom John Light – SBTech).

The panel was guided and moderated by Mr. Paul Davis (Counting House ltd.) who has instructed each speaker in the right direction in order to finalize their discussions and complete the agenda.

The 1 hour and 20 minute panel gave chance for a record breaking number of 8 speakers to talk about topics such as Bitcoin, Daily Fantasy Sports, Virtual Gaming, Financial and Binary Options.

Each of these presentation will be available by 30.09.2016. In order to receive the presentations via e-mail, please write to us on the following e-mail address: [email protected]

The panel was followed by a 2 hour networking session which included a wine tasting area that was sponsored by Counting House and an open bar sponsored by the organizers.

The Wine tasting and the networking session was concluded by the a complimentary dinner in order to give chance for the delegates to relax and of course witness the CEEGAwards session.

The awards were presented by Zoltan Tundik and Tal Itzhak Ron and the winners were announced in a relaxed and friendly manner. The guests/delegates of the conference have become the audience to one of the most relaxed settings for an award giving session that has been seen so far. Figures, after such a full of events day, this was really welcomed by many. Especially the winners of the categories, which you can find below:

We as the organizers thank all delegates to understanding the unplanned twist of situation and we would also like to ensure them that we have put maximum effort in order to finalize the event to become a success and an unforgettable experience, beside the bomb scare of course.

We hope to see you all next year as well in a two day conference which will gather +40 speakers and +250 delegates.