The Asian-facing gambling outfit, 12BET, has signed a long-term sponsorship deal with Premier League giants Arsenal, and Zlatan Ibrahimovic announces that he had the chance to join The Gunners in the summer.

Asian-facing gambling operator, 12BET, has increased its presence in the Premier League after signing a deal to become the regional betting partner of Arsenal. 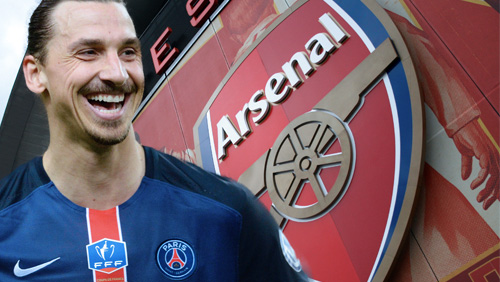 The deal, described only as ‘long term’, will see the 12BET logo advertised pitch side at all Arsenal’s domestic home games at the Emirates Stadium, and sees them gain access to the team’s stars for promotional purposes.

The press release that accompanied the news stated that a ‘third of the club’s broadcast audience is based in Asia.’ Arsenal was also involved in the most watched Premier League matches in an Asian market that captures 1.7 billion eyeballs.

The financial terms of the deal are a mystery, but when you consider AON pays Manchester United £10m to sponsor their training kit, you can assume the word ‘million’ is in there somewhere.

Zlatan Ibrahimovic has told the press that he received offers to play for both Arsenal and Manchester City before deciding to join the Red Devils. The Swedish star, who joined United on a season-long deal, cited Jose Mourinho as the main reason he chose United over the other two leading Premier League clubs. Ibrahimovic called Mourinho a ‘mastermind’.

Jamie Vardy has told The Mirror that it was an easy decision to turn down Arsenal and instead sign a new four-year deal with the Foxes. The England star, who was an unused substitute in their 1-0 win over Slovakia last night, told the rag that his heart and head kept telling him to stay put.

With both Ibrahimovic and Vardy snubbing Arsenal it’s left the Gunners woefully short of firepower. Arsene Wenger is hoping that a late bid for Lyon’s Alexandre Lacazette will solve their problems, but the French newspaper L’Equipe believe it’s too late, revealing that the youngster is about to sign a new deal rumoured to be in the region of £85,000 per week. Lyon is also looking to insert a £59m buyout clause in the new contract, which should scare off Wenger and the men with tight-lipped wallets at the Emirates.