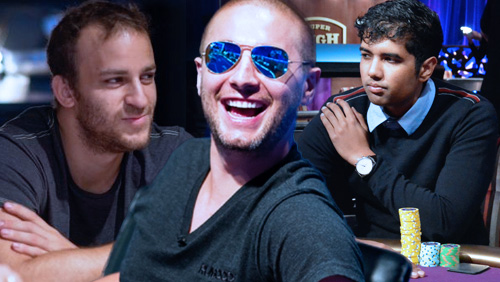 3-Barrels of pure value including Sorel Mizzi appearing on the Joe Ingram Podcast talking about ethics, Pratyush Buddiga being popped the question by his parents, and Chance Kornuth winning the Charity Series of Poker event in aid of Brad Garrett’s Maximum Hope Foundation.

Sorel Mizzi has appeared on Joe Ingram’s Poker Life Podcast talking at length about his involvement in a series of incidents in the online poker game that can be construed as cheating or being deemed unethical.

“It’s unfortunate that when people think of me and see me, who don’t know me, they associate me with cheating, breaking the rules, and scummy behaviour,” Mizzi told listeners in a full and frank discussion about his past.

Mizzi talks at length about multi-accounting practices, and taking over accounts from weaker players, referring to the practices as being ‘normal’ back in the day when online poker was in its infancy. Talking about the incident that saw him banned from Full Tilt, when he paid someone to take over his account when deep in an event and then won it, he said that it was so normal at the time he and a group of friends were considering setting it up as a business.

“This is online poker,” Mizzi said referring to the fact that you never truly know who you are competing against in the online world. “I am not saying I am a saint by any means. I am a huge screw-up. I have compulsive behaviour. I am not going into it thinking I am screwing people over. I want to play deep in tournaments.”

It’s a great podcast that stirs up a lot of questions surrounding ethics and morality in online poker. One of the issues that came up for me was how the Global Poker League (GPL) would react if one of their players were involved in a similar scandal today?

Mizzi knows that his previous actions in the game have somewhat blackened his personal brand in some quarters, but now he represents the Berlin Bears franchise and the GPL. Does that additional responsibility make a difference to the player? Would the GPL sack the player if they felt they took a line that tarnished the integrity of the GPL?

These are interesting questions, and they wouldn’t be possible without people like Mizzi talking openly about these digressions and laying them bare for debate.

You watch proudly as your kid whizzes through school with his eyes closed.

He meets the President.

He can achieve anything.

And then he decides to become a professional poker player.

There is only one out for parents when faced with such ignorance.

Jesus Christ, just got the “Would you ever be open to an arranged marriage?” speech from my parents. Time to get to Florida asap

Yes, it’s true, even in 2016 there are people on this earth who believe grabbing two complete strangers and forcing them to wed for life is a good idea.

At least Buddiga’s parents are posing the question and forcing the issue.

The Charity Series of Poker Raises $20,000 For the Maximum Hope Foundation

Comedian Brad Garrett is a happy man after the Charity Series of Poker (CSOP) raised $20,000 for his charity The Maximum Hope Foundation (MHF).

CSOP founder, Matt Stout, organised the event as part of the Seminole Hard Rock Poker Open (SHRPO) and decided to donate the funds to Garrett’s foundation after he became disillusioned over the effectiveness of his previous supported charity Habitat for Humanity.

Garrett founded the MHF in 2007, and money raised goes towards parents of children who are suffering from life-altering illnesses, and are struggling financially to care for them.

The charity inspired 167 entries, and Chance Kornuth fired three bullets on his way to a victory that earned him $5,000 and a seat into the SHRPO Main Event.