Macau junket and casino investor Amax International Holdings Ltd has downplayed the impact of the temporary closure of Beijing Imperial Hotel to the group’s financial position and operation. 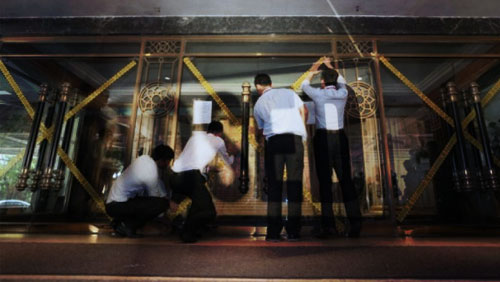 In an announcement to the HongKong Stock Exchange on Friday, Amax allayed fear of investors that the brief operation stoppage of Beijing Imperial Palace Hotel, which houses its beleaguered casino, Greek Mythology, will have a negative effect on the financial position of the company.

On the contrary, Amax claimed that Greek Mythology – which was temporarily shut since December 30 on the request of SJM Holdings – could continue its operation notwithstanding the close-down of the hotel under the law of Macau.

The Hongkong-listed gaming services firm, however, admitted that the temporary lock down of Beijing Imperial Palace Hotel may have a negative impact on the number of visitors and its business plan.

“The Working Committee, after it is formed, will work closely with MGTO and other relevant departments to address and resolve the issues of the Decision, with an aim to resume the operation of the Hotel within six months,” Amax said in its filing.

Beijing Imperial Palace Hotel, which was formerly known as the New Century Hotel, had been a subject of a legal tug-of-war between Amax and Victory Success Holdings. Sun acquired the hotel in 1996 but lost control of it in 2012 after ‘temporarily’ transferring 80% of its shares to his former paramour Chen Mei Huan, who decided the transfer was permanent once the couple split up.

In May, Amax questioned the validity of the transfer of Beijing Imperial Palace Hotel to Victory, claiming that the ownership of the property has yet to be settled by the court.

Amax chairman Ng Man Sun earlier accused Victory of trying to ‘influence’ the outcome of a lawsuit he lodged in connection with the property dispute after Empresa Hoteleira de Macau Lda announced it has transferred the ownership of the hotel property to Victory on October 22, 2015 as payment for debt.

“There is a legal action brought by Mr. Ng Man Sun against Victory Success Holdings Limited in the [Court of First Instance] wherein Mr. Ng Man Sun requests the reversion or nullity of the transfer of the property,” the statement reads.

‘These proceedings are pending decision and the announcement made by Victory Success Holdings Limited is an attempt to influence the outcome,’ it added.

On Friday, the Macao Government Tourist Office (MGTO) ordered the Beijing Imperial Palace Hotel to shut down on Saturday (23) due to its operator having “committed serious administrative irregularities, constituting threats to public safety.” The closure will last six months.

Amax, for its part, said in Friday’s filing: “having sought legal advice from the company’s lawyer in Macau on the possible impact of the [hotel temporary closure] decision to the group and possible appropriate actions to be taken by the company, the company is of the view that as the decision involved various governmental departments in Macau including MGTO, lengthy and numerous communication with these governmental departments is needed before conclusion could be reached.”

“The company could only conclude any appropriate actions to be taken after communicating and clarifying with various governmental departments in Macau to make a detailed assessment of the overall situation,” Amax added.