Ian Smith On His Role as ESIC Integrity Commissioner

Ian Smith sits down with Lee Davy to talk about his role as the Integrity Commissioner for the eSports Integrity Coalition, the story behind the creation of the coalition, and their plans for improving this area in one of the fastest growing areas of sport in the world.


Ian Smith On His Role as ESIC Integrity Commissioner Audio

The following interview is an abridged version of a 45-minute conversation with Ian Smith, Integrity Commissioner, eSports Integrity Coalition (ESIC).

During my conversation with Ian, I learned about the creation of ESIC and why he was chosen to spearhead the coalition. We talk about the results of the initial threat assessment and how policy and procedures emerged as a result.

We also speak of the challenges that eSports competitors face regarding education, what eSports can learn from cheating scandals in traditional sports, and how Ian and the coalition don’t want to impinge on the personal lives of eSports athletes when it comes to doping. 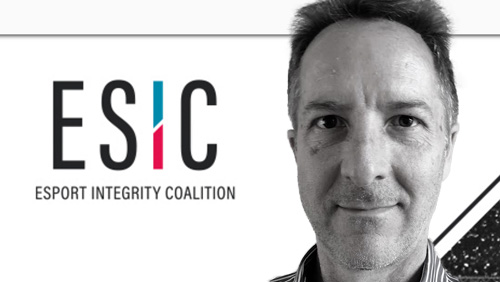 Where was the idea of ESIC born?


It was born out of a threat assessment I was asked to do regarding the integrity threats to eSports in Autumn last year. We identified nine different threats, four of which were important. I was asked what I would do about them and the recommendations I made ultimately became the foundation of ESIC.”


Why did they choose you for the role of the commissioner?


“I had a long background in traditional sports in particular on integrity issues. I spent a long time working in cricket, but also in a lot of other sports. Unfortunately, I acquired some expertise in areas of integrity like match fixing and doping. People who knew that this issue needed to be looked at knew I was looking at something to do because I was disillusioned with my work in cricket and needed a different challenge.”


Are you a gamer?

“I am a big fan of PlayStation games in particular. I like things like Fallout, Tomb Raider, Dead Space, that kind of stuff. I am not a competitive gamer. I like to plod my way through and find everything. Competition except Hearthstone is beyond me.”


What were the nine threats?

“Numbers one to four were the principal ones regarded as the high threats and high occurrence. Number one is cheating to win using software hacks, and that sort of thing. It’s the major threat to gaming integrity. It affects everyday players as well.


“Number two is hampering your opponent; primarily online attacks like DDoS. I will come back to the third. Number four was doping; again that’s with a view to winning. It’s the same as traditional sports. Some cyber athletes believe they gain an advantage by taking certain substances. It’s not something that makes me wake up in a sweat at night.


“Number three is the big issue from an ESIC point of view, and that’s match fixing which is effectively betting fraud. It’s guys deliberately losing to manipulate betting markets. It’s the one area where the industry was not proactively dealing with it, no systems in place, and no knowledge. People were in denial that it existed, didn’t know it existed or acted on an ad-hoc basis when they realised it existed in isolated cases.


“The other ones were the ability of technicians or admins to affect results like a guy setting up a LAN tournament. Admins could take certain decisions during a match. League officials could alter the draw. These are all, in my assessment, very low-level risks. It’s not to say we aren’t doing anything to mitigate against them, but they are not the high priority ones.”


How do you turn the threat assessment into an organisation?

“What existing measures were there in each case and what would I do in each case based on my experience? Looking at what’s happened in other sports, the various cases we have dealt with over the years, they teach you something about match fixing. There is no right answer, but I have had a broad experience, looked at the piece and said I think the answer is this.


“The two things that struck me as different with eSports were skin betting, and that eSports don’t have a governing body like FIFA. Nobody is controlling from the centre. There are these series of islands some of which have rickety bridges between them but in general, they are working in isolation. They have a publisher with one game, or two in Valve’s case, a bunch of self-contained tournament organisers like ESL, FACEIT, down to tiny little two man operations running $250 tournaments. That was a challenge for me regarding systems because there was no governing body to go to without systems. The only answer was to create some sense of consensus and coalition by having an organisation where people could join voluntarily which of course is fraught with political difficulty in eSports.


“The alternative is each island does its own thing. I don’t think that will work. If we take CS: GO as the main game. The CS: GO players competing in the top leagues, if they were subjected to different rules and procedures in those leagues, there would be no coherence at all. There would be inadvertent breaches, guys wouldn’t know if they did something in one league what would it mean to other leagues, how would it affect CS: GO broadly and what about Valve? It would be like the Wild West. The only logical approach to take if you want an effective system is to have one set of rules.


“Man Utd play in the Premier League and can qualify for the Champions League. They may occasionally play friendlies with teams from other leagues. What could never happen is Man Utd playing in the Bundesliga, and not necessarily playing in every game. This is exactly how eSports operates. If you are SK Gaming, how do you decide which tournaments you will play? There is very little schedule coordination in all of this. The market will consolidate over time, but that doesn’t solve the regulatory problem that eSports leagues all have the same problem, and that’s the threat to integrity to their competitions, and they would all suffer.”


Are they worried that by joining they recognise there is a problem?


“I can’t speak on their behalf, but it’s highly likely there are potential coalition members who can’t believe that anyone in their community will cheat. There is a cognitive dissonance about this. But to be fair to eSports, you also see the same thing in traditional sport. I am sure that thinking exists, but it’s my job to overcome that with a dose of credible reality which is there is match fixing, and the only question is what are you going to do about it?”


We do have a tendency to screw things up and then try and fix things after the fact. You are trying to implement preventions.

“Some people have said brilliant we are in. Others have reservations but are close to joining. Then there are others who are struggling to understand why they should get involved. History shows in a traditional sport this sort of regulation only gets dealt with effectively after a big match-fixing scandal has hit the Sunday newspapers.


“I have been trying to tell the eSports community that apart from some high profile Starcraft II and LOL cases in Korea and some high profile low-value cases in Western Europe and the US we haven’t had a scandal. That doesn’t mean there isn’t one coming. A wise man learns from his mistakes, but a wiser man learns from someone else’s. I think they are, but it will take some people a little longer to accept that ESIC is the right approach.”


Is match-fixing problematic in the tournaments where the prize pools are the lowest?


“That’s reflected in the research we have done. There is no way that someone is going to fix The International in Dota 2. There is a very low risk that someone will fix a Counter Strike major because there is a lot of money to be made in winning, these players tend to be well paid and reasonably satisfied.


“In the middle or lower tier people aren’t making enough money to make a living. They could earn 10x their tournament winnings just on the skin betting market, let alone traditional money markets. On top of that, you have impressionable young guys and teams who treat their players very poorly – don’t pay them on time, don’t pay them in full, and exploit their players. You don’t get away with that with World Class players. If you are struggling, and looking to reach that level and are just happy, you have a team you are easily exploited. Then when someone comes along and says we can make $5k on this instead of legitimately competing that is a serious temptation.”


Education is so critical then?


“They are a very vulnerable demographic. The priority is absolutely to educate and create a deterrent. The best deterrent to corrupt behaviour is having knowledge about it. A lot of guys wouldn’t even recognise a corrupt approach while it was happening. A lot of my time is spent teaching people to establish who the bad guys are and learning what we can do about it.


“We have a long way to go. We have started at the top. At an event like Intel Extreme Masters, the top teams have had this education that continues throughout. In the next few months, there will be an online tutorial so everyone can learn, and we will continue to roll out our live learning product.”

To hear more of this interview listen to the audio file above.