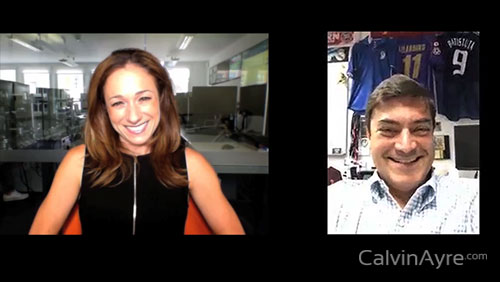 With the UEFA Euro 2016 tournament in progress, football (or soccer as we’ll use for this feature to avoid any confusion) is top-of-mind for millions of fans around the globe.  As I mentioned several weeks back during my interview with the AGA’s Geoff Freeman, everyone around me is betting on the Euros.  What I hadn’t thought of is how daily fantasy play could enhance entertainment for fans while following the tournament.

Mondogoal.com is a daily fantasy soccer site with the largest number of European users and a vision of becoming the “PokerStars” of fantasy sports.  Shergul Arshad, the CEO and Founder of Mondogoal has a strong background in soccer, formerly heading up digital strategy for AS Roma and being born and raised in Florence, the sport has been a significant part of his life since day number one.

Seeing as the timing is appropriate, I spoke with Arshad to learn about the massive opportunity in daily fantasy soccer that exists in Europe and what the future holds for this niche of the online gaming industry.

According to Arshad, there are two main reasons why he decided to focus his company solely on the daily fantasy soccer market.

1)Soccer is by far the world’s largest sport.

As an American, I grew up thinking baseball, American football and basketball were the biggest, most popular sports in the world.  Only until I lived in the UK did I realize just how massive soccer is around the world and in fact, the soccer following globally greatly outnumbers the popularity of the sports most prominent in America.

Basketball has just over five million fans, so as you can see, these soccer stats dwarf the numbers surrounding the biggest American sports.

2)Its a culture that already existed.

“Fantasy soccer has actually been around for thirty years.  There were newspaper sites back in the early ‘90s, late ‘80s, that were running leagues”, Arshad explained.

You might be asking yourself, why would a football crazed fan choose to participate in fantasy sports rather than simply betting on their favorite team?

I liked Arshad’s analogy- the mindset for someone who enjoys daily fantasy sports is akin to the manager who sets the line-up and brags to his peers about picking the right players.  Arshad defines daily fantasy soccer (and DFS in general) as more of a skill game and compares the skill element to that of online poker.  Simply stated, refined players have better odds of winning than less experienced players.

Another point to remember is daily fantasy soccer is a perfect companion when following tournaments such as the Euros because it allows for players to be involved with all the games, all day long.

Mondogoal have recently announced B2B deals with two of the largest Italian gaming companies, Lottomatica and SISAL. Arshad’s plan since launch was to prime his company for partnerships exactly of this nature.

“When we set up Mondogoal, we launched in time for the 2014 World Cup and the immediate goal and vision to be executed upon was to be multi-language, multi-territory, multi-league and multi-currency.  So we launched a US site, a UK pound site and then in Italy we’ve been running in Euros and we’ve also got now about 20 different leagues from all around the world”, shared Arshad.

Reaching contractual terms and actually becoming live on both sites in time for the Euros was huge for Mondogoal.  Feedback on the product from both Italian companies has been outstanding so far and we can likely expect to see more deals of this nature announced in the future.

The opportunity for daily fantasy soccer is vast and for Mondogoal, this is just the beginning.  Arshad already has aggressive, yet reasonable, plans for expansion.

“We look at a four-pronged approach in regards to growth and we can go from there.  Initially it was building credibility and essentially alliances through clubs and federations.  Next up was to do some big media deals, so partnerships, for example last year we were the official fantasy soccer partner for Yahoo!”, he said.

Arshad continued, “Next up is certainly the betting sites, with Lottomatica and SISAL leading the way, but for us we think that growth can come in an explosive format, specifically explosive in a revenue way, by partnering up with folks who already have done the heavy lifting with the millions of users and depositors that are looking for a new fun game”.

Of course there are new territories and new sports on tap for Mondogoal as well.

At the moment, Mondogoal offers cash play in the UK, Ireland and Italy and free-rolls are available for play in countries like France and Germany.  Arshad plans to roll out into new territories, especially places like China and the Far East markets where soccer is especially popular.

Eventually new sports will be added into the Mondogoal mix, for example basketball, cricket and rugby, but Arshad projects these sports will only account for 10-20% of the business with soccer accounting for the rest.