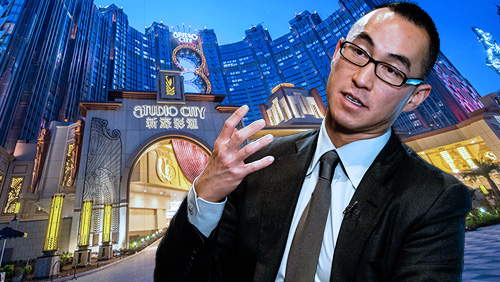 Ho is not amused by how Studio City’s marketing team has been performing, admitting that they have failed to translate the company’s brand to the public. As a result, Studio City’s first quarter profit in 2016 was well below market expectations at USD195 million.

Studio City – which targeted the gaming mass market and promoted non-gaming activities – did not fare well as analysts had initially predicted. Adding pressure to the beleaguered casino’s growth is the anticipated opening of MGM Cotai, Wynn Palace and The Parisian on the Cotai Strip, each eyeing the mass-gaming segment.

“We just need to do a better job at marketing ourselves and bundling offers – it’s not rocket science,” Ho told Barron’s Asia. “We had a lot of brand awareness and buzz [at our launch], but somehow our marketing team hasn’t really translated that.”

Ho said that he expects the mass market in Macau to become “super competitive” between the six gaming operators in the future.

Nevertheless, he said, Melco should “keep delivering our products and services better” and strengthen the property’s emphasis on entertainment and other non-gaming elements.

Statistics shows that only 30 percent of analysts who rate Melco are advising “Buy” compared to an average 51 percent for Melco’s rivals, excluding SJM Holdings. Just last month, Australian casino operator Crown Resorts has reduced its stake in Melco, leaving Ho as the largest shareholder in the casino firm.

Although he has refused to comment on whether the share sale was a one-off, the Melco CEO said James Packer of Crown Resorts intends to remain a major shareholder in is firm.

He added that while Melco Crown’s capital expenditure is expected to be relatively modest in coming years, Crown Resorts has several new projects in Australia.

“In Asia and around the world, we don’t see that many opportunities right now,” Ho said, referring to Melco Crown.

James Packer, the former chairman of Crown Resorts, recently relinquished his title and reduced his stake in Melco Crown Entertainment from 34 percent to 27 percent. Crown Resorts also intends to split its Melco stake from the rest of the company as part of a restructuring strategy.

In spite of the gaming downturn, Macau remains an important market for gaming operators, with nearby competitors in the Philippines, Vietnam and South Korea still far behind in terms of gaming development and relevant government legislation.

“For Melco, every time we build something, we want it to be at least a billion-dollar property,” Ho told Barron’s Asia.

“We don’t see any [other] jurisdictions that would be able to sustain that.”