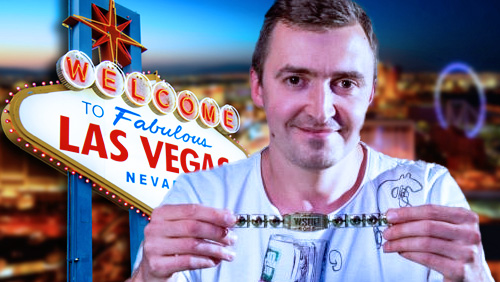 Russia has their first bracelet of the summer after Viatcheslav Ortynskiy defeated 580 entrants to win Event #30: $3,000 Six-Handed Pot-Limit Omaha; Daniel Alaei is in an excellent position to defend his title in Event #32: $10,000 Omaha Hi-Low Split-8 or Better, and more.

The Russians have their first gold bracelet of the summer after 34-year old Viatcheslav Ortynskiy defeated 580 entrants to win Event #30: $3,000 Six-Handed Pot-Limit Omaha. The event created $1,583,400 in prize money, 87 players finished ITM, and Ortynskiy picked up $344,327 for his win.

It was a sweet moment from the Krasnoyarsk native, after finishing third, fourth, and fifth in World Series of Poker (WSOP) events. Ortynskiy is a regular on the European Poker Tour (EPT) circuit, but his largest scores have come in the greatest festival of them all.

WSOP’s Nolan Dalla said that Ortinskiy ‘demolished’ the competition, and that’s some feat considering Randy Ohel had a seat in the final six. Ohel, who is having an outstanding WSOP, finished third. He has cashed four times this summer, and they have all been Top 10 ITM finishes with an 8th in the $1,500 Dealers Choice Six-Handed, 4th in the $10,000 Dealers Choice Six-Handed Championship, and 10th in the $10,000 H.O.R.S.E World Championship. He is also a former bracelet winner.

Ortinskiy’s victory is the 12th for Russia in WSOP history.

Germany’s Jens Grieme and the American Alex Ziskin are locked in the poker battle of their lives as Event #29: $1,500 No-Limit Hold’em spills into the fourth day of action.

The pair had played 200 hands of heads-up action before the officials called a halt to proceedings. Grieme ended the day with the 7.79m v 5.69m; quite remarkable considering he was down to one big blind at one point during the heads-up match.

The German Grieme is cashing for the third time this series. All six of his previous ITM cashes have been in WSOP events. His best live cash was $8,855 for finishing 71st in a $2k No-Limit Hold’em event in 2008.

Ziskin is also cashing for the third time this series. The American has more ITM experience than his German counterpart. He finished 11th in the World Poker Tour (WPT) Main Event in Jacksonville in Season XII for $17,292, and 17th in the 2014 Little One for One Drop for $25,087. He has over $172,000 in live cashes.

A few other headline acts that made deep runs were Jean Montury (13th), Matt Stout (14th), and Konstantin Puchkov (19th).

The Super Seniors event attracted 1,476 entrants, and Fred Berger has the chip lead with 14 players remaining after eliminating the reigning champion Jon Andlovec. It was a great run for the former champ, who finished in 20th place.