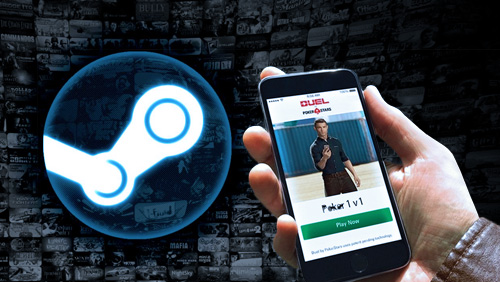 3-Barrels with an Amaya Gaming flavour as PokerStars withdraws their DUEL app from the market; prepare to launch Jackpot Poker on Steam, and pick up an EGR Award for Spin & Bet.

I love poker, but I can’t play. I don’t have the time. I am a busy man, always writing, reading; trying to be a father, and a great husband. And that’s why, when PokerStars announced plans to launch a new innovative product called DUEL I got quite excited.

I thought they understood me. I figured they saw me. For the first time, in a very long time, I thought they had crept into my head, pulled out the notepad, and starting figuring out why I wasn’t playing and what they could do to lure me back into bed with them.

DUEL was a turn-based heads-up format of poker that played similar to Words With Friends. It was perfect for people who could only fit in a few moves between meetings, shitty nappies, or 15-seconds of Oh My God!

PokerStars has announced they will be pulling the app from the market after beta testing revealed there would be problems ‘at scale.’

Come on, climb inside, and get that notepad out again.

Jackpot Poker to Launch on Steam

Sometimes I watch a TV program like Breaking Bad, and I think: ‘Did the script writer think about that at the beginning, or did he just make that shit up on the fly?”

And, I sometimes think about that in poker too.

Take the decision to open Full Tilt Poker on Valve’s Steam platform. At the time, it seemed like an ingenious idea. All those video game loving eyeballs to tease. And then they went and jammed a fork through the heart of the once-mighty online poker room, and you start wondering who is pulling the future strategy strings?

All is not lost, though. According to reports, Full Tilt Poker will soon be replaced on Steam by PokerStars Jackpot Poker. Expect the move to take place in the summer.

PokerStars DUEL might not have been a hit, but BetStars Spin & Bet has been. Seriously, this little beauty sets off a chain reaction for a punter akin to sticking a junkie in a Welsh love spoon store.

Spin & Bet, an offshoot of the hugely successful Spin & Go Poker, gives sports bettors the opportunity to increase their odds by up to 10x. Go on. It’s one little spin.

Amaya Gaming’s innovation was rewarded recently when they walked away from The Pavilion in The Tower of London with the award for ‘Innovation in Sports Betting’.

And with Euro 2016 around the corner, I can’t think of a better time for people to start spinning.