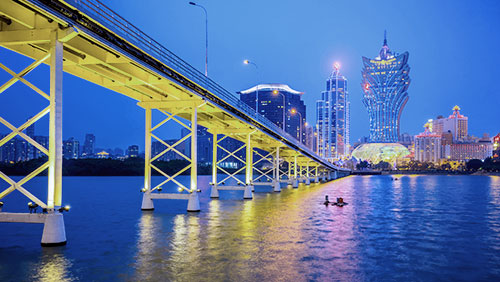 Macau’s economy shrank by 13.3 percent in the first quarter of 2016, dragged down by continued decrease in exports of services due to lower gaming revenue and tourism industry weakness as a result of China’s anti-corruption drive and economic slowdown.

The latest data released by the city’s Statistics and Census Service DSEC, last Monday was rather a good news for China’s beleaguered gambling hub, which marked the seventh straight quarter of economic contraction and saw its sovereign debt status downgraded by Moody’s Investor Service several days ago.

Statistics suggests that Macau is on track to economic recovery after hitting rock bottom in the second quarter of 2015 when it posted a contraction of 26.4 percent. Macau’s 13.3 percent contraction in the first quarter of 2016 is also an improvement from the 2015 fourth quarter GDP fall of 14.4 percent.

External demand showed no sign of improvement as exports of goods and services fell by 24.6 percent and 13.7 percent respectively. Gaming services in Macau, which were equivalent to more than 52 percent of Macau’s GDP at current prices, are included in exports when calculating the city’s GDP.

The DSEC also noted that investment slowed in Macau in the first three months of the year as the gross fixed capital formation, which serves as a gauge of investment, contracted by 31.9 percent year-on-year, owing to the substantial decline in private investment.

A slowdown in the construction of major tourism and entertainment facilities, as well as the high comparison base year, was blamed for plummeting private investment, which is down by 33 percent.

While compensation of employees in Macau rose by 3.1 percent, the DSEC noted that it didn’t stanch the economic bleeding of Macau. The DSEC reported that household final consumption expenditure in the domestic market fell by 2.3%.