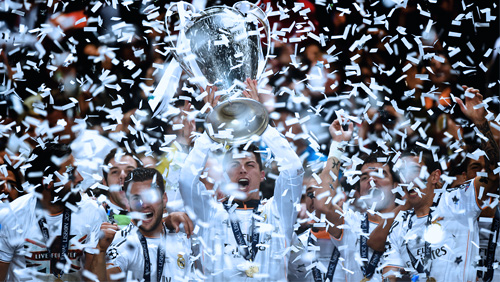 Real Madrid wins a record 11th Champions League Final after beating their neighbours Atletico Madrid 5-3 on penalties thanks to a Cristiano Ronaldo winner.

Real Madrid has ‘it’.

And that was the difference between the two sides in the stifling heat of the San Siro Stadium on Saturday night.

The ability to sling rifles over their shoulders, dive into the trenches and emerge the other end alive and well. Atletico knows how to beat Real. On the ten occasions, the sides have met since the 2013 UEFA Champions League Final, Diego Simeone’s men have won five, drawn 4, and only lost once.

And that one defeat?

It was in the 2015 Champions League Quarterfinals.

Like I said, Real know how to get to the other side of the trench riddled with bullets, but with a beating heart still pulsing away in that cage.

It was the 14th Champions League Final for Real, and only the 3rd for Atletico. Zinedine Zidane was attempting to become the first Frenchman to win the Champions League as a manager. Simeone was trying to avoid the dubious honour of being one of a select band of men to lose twice.

Real started the better of the two sides. They looked more at home in the Milanese cauldron, and they got their reward in the 15th minute after Gareth Bale flicked on a Toni Kroos free kick from inside the box, and the Real captain Sergio Ramos stabbed the ball home from close range.

Replays show that Ramos was offside when he poked the ball home, but the linesman missed it allowing the Spaniard to become the first defender to score in two different Champions League Finals.

Real sat back. Atletico got off the hamster wheel and took charge. Karim Benzema should have made it two when he shot against the legs of Jan Oblak, and then Atletico was handed a golden opportunity to equalise after Fernando Torres drew the foul from the ridiculous Pepe allowing Mark Clattenburg to point to the spot.

Griezmann, so often the Atletico hero this season, stepped up to take the penalty only to blast his effort against the bar becoming only the second player in history to miss a penalty in a Champions League Final. Then in the 79th-minute substitute Yannick Carrasco sent the game into extra time after converting an excellent volleyed cross by Gabi

It was the third time in the past five seasons that the Champions League Final had ploughed into extra time. Two seasons ago Real finished Atletico off during the final 30-minutes thanks to Gareth Bale, Marcelo, and Cristiano Ronaldo, and it seemed as if Atletico remembered that night like it was yesterday. They sat back, Real pushed on, and looked the more likely to take the title until Clattenburg sent the tie in the lottery of the penalty shootout.

Seven players confidently strode forward and put the ball into the back of the net. Only one failed, and he was one of the most experienced of the lot after Atletico’s Juanfran shot tamely against the base of the left-hand post.

Cometh, the hour, cometh the man.

He sealed the 2014 victory with a last minute penalty. And there was no danger of him missing this one. He looked like a gladiator about to take the pike down on a slaves head.

“I knew I would score.” Said Ronaldo after the match.

Everyone in the world did.

A few seconds later and he was ripping his top off like the Hulk as Real were crowned the champions of Europe for the 11th time.

What a way to lose a Champions League Final.

The other hits the back of the net.

But in truth, the reasoning goes much deeper than that. Those two moments encapsulated the winning mentality. It was an insight into why Real have ‘it’, and Atletico doesn’t.