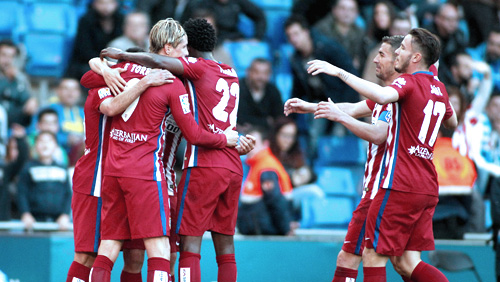 Lee Davy takes a look at the UEFA Champions League Final and explains why he believes Atletico Madrid will get the revenge they are seeking when they meet Real Madrid in the San Siro on Saturday night.

It’s only happened twice in the past 61 years. Two clubs. One City. Battling it out for the right to be crowned champions of Europe.

Madrid will feel like The Walking Dead on Saturday night as 40,000 fans from Atletico and Real leave the city en route to what they hope will be a glorious night in the San Siro Stadium in Milan.

There is one word on my lips as I traipse across the keyboard looking for wisdom.

Two seasons ago, Atletico went into their first Champions League final in 40-years at the Estadio da Luz in Lisbon as the rank outsiders, competing against their upper-class neighbours Real. By the time the clock had reached 90-minutes Atletico were five injury minutes away from proving everyone wrong thanks to Diego Godin’s 36th-minute opener.

Luka Modric swung a corner in from the right, and Sergio Ramos rose majestically to head the ball into the bottom left-hand corner of the net. That goal ripped the heart out of Atletico’s ribcage with so much force they couldn’t move. Madrid went on to score a further three times in extra time (Bale 110′, Marcelo 118′, and Ronaldo 120′) to win the world’s most prestigious club competition for a record 10th time.

The mere fact that Atletico was featuring in only their second Champions League Final in history, and given their status as European underdogs, it didn’t seem likely that Diego Simeone’s men would get the opportunity to enact revenge any time soon.

UEFA officials, albeit not purposefully, made the likelihood even more remote after pushing the likes of Barcelona and Bayern Munich in front of them during the knockout stages.

And now here they are.

And I have a sneaky suspicion that Atletico will create the upset. Real looked lacklustre in their Semi-Final victory against Man City. However, that may be more to do with how poor City was. That said, in a Champions League Final you are going to need all 11 players pulling their weight, and I don’t see the forward players of Real working for the team in the same way Atletico’s do.

Bookmakers have anywhere between 50-100 bets on this game, and most of them side with Real. I guess that makes sense when you have a forward line consisting of Cristiano Ronaldo, Karim Benzema, and Gareth Bale, and one of the greatest conductors of football in the middle of the park in Luka Modric.

Ronaldo is the Champions League top scorer with 16 goals and he leads the first goal scored market at odds of 7/2. Atletico has their hotshot in the Frenchman Antoine Griezmann and you can back him to score first at 11/2. Griezmann has a better shooting accuracy than any Champions League player with 85% of his attempts ending up between the sticks.

The teams strengths transcend their manager’s demeanour. Diego Simeone prowls along the touchline, feeling every tackle, every pass, and every shot. Zinedine Zidane is calmer, instead allowing his faith in his team to get the job done. And they haven’t let him down. In the 26 games, he has been the overlord of the Bernabeu Real have won 21 times and lost only twice. They lost La Liga to their arch rivals Barcelona by a single point, and they didn’t feature in the Copa Del Rey final. It is their last chance for silverware this season. Real managers don’t hang around long without any.

It’s going to be as tough as old boots. Chances will be sparse despite the attacking talent on show. The referee will need eyes in the back of his head. Real has never won at the San Siro and I think it will stay that way. The tie will once again go to extra time, with Atletico pinching it with a final score of 2-1.