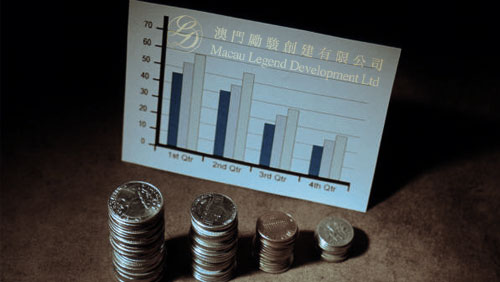 High rollers in Macau fail to lift the first quarter earnings of casino services firm Macau Legend Development Ltd, which has dipped by as much as 3.7 percent to HK$350.6 million (US$ 45.15 million).

Macau Legend’s total revenue was dragged down by a 52.2 percent, year-on-year decline in adjusted earnings before interest, taxation, depreciation and amortization (EBITDA) to HKD35.8 million (US$4.6 million).

Reflecting the negative sentiment in the region, Macau gross gaming revenue for the first three months of 2016 declined by 13.3% year-on-year.

“All gaming segments in Macau including the VIP, premium mass and mass market continue to be difficult but gradually there are signs that the market has stabilized,” Casino Mogul David Chow said in a statement.

As for the gaming firm’s non-gaming arm, Chow reported that Harbourview Hotel, the group’s first new hotel of the redevelopment of Macau Fisherman’s Wharf (MFW) opened in February 2015, contributed revenue of HK$33.3 million (US$4.29 million), an increase of 139.8% year-on-year.

“In Macau, we will continue to focus on cost controls measures and at the same time, work harder to grow the mass segment,” Chow said.

However, the review has also indicated a likely stronger oversight in VIP segment and that diversification is needed in order to lessen dependence in a single industry.

Macau Legend’s CEO said the firm is carefully juggling options to reduce risks associated with the current slowdown in Macau’s gaming industry and, at the same time build new capacity for the future.

Looking forward, Chow said Macau Legend will continue to focus on Southeast Asian destinations where the “One Belt, One Road” policy from China is supporting new investment in tourism and tourism related infrastructure and also in Portuguese-speaking countries where there is a similar policy initiative.