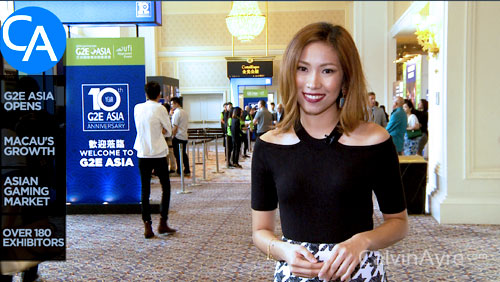 Celebrating its 10th anniversary, the Global Gaming Expo (G2E) Asia 2016, Asia’s premiere iGaming industry event, kicked off in a historic feat in Macau today. The vibrant—and as expected—eventful G2E Asia opened its doors to 180 exhibitors, a 12% increase from last year occupying 9,200 square meters of exhibition space which is triple in size since the first show.

Organized by Reed Exhibitions in partnership with the American Gaming Association (AGA), the trade show and conference for the entertainment and gaming industry officially opened with dignitaries from local government and business organizations gracing the ceremony. This includes Kou Ming, deputy director of Economic Affairs Department of the Liaison Office of the Central People’s Government in Macau SAR; Liu Yu, director of Policy Research Department at the Ministry of Foreign Affairs of the People’s Republic of China in the Macao SAR; Cheong Chu Weng, president of Macao Trade and Investment Promotion Institute; and Paul Chan, director of Gaming Inspection and Coordination Bureau. Macao S.A.R.

In his speech, Reed Exhibitions president Hu Wei presented this year’s achievements. Aside from 180 exhibitors, G2E Asia has over 6,500 pre-registered visitors from 95 countries. The turnout of the pre-registration is 17% year-on-year increase, which, according to Wei, is proof that G2E Asia is the show that the industry trusts.

Geoff Freeman, president and CEO of AGA, could not be more thrilled by the numbers presented by Wei as he welcomed guests, and uttered his excitement for this year’s show, and to what has happened in Macau over the past ten years.

We spoke to Freeman about his thoughts on the changing gaming market in Macau, and keeping up with it. He said, “It is about finding the right balance (between non-gaming and gaming) for Macau. What works for Vegas may not be exactly what works here, but I know that the operators are developing these (non-gaming) amenities. They are optimistic about the future.”

Conference tracks opened today with Aaron Fischer, regional head of Consumer and Gaming Research of brokerage firm CLSA, with his session on the outlook of the Asian Gaming Market.

“We’re very optimistic of the Asian Gaming overall. Some markets are doing exceptionally well this year like Saipan is growing dramatically,” Fischer revealed. Aside from Saipan, the Philippines, Cambodia and Vietnam have also shown growth over the recent years, according to Fischer.

This year’s event also inaugurated Asia Gaming Awards (AGAwards), an independent, transparent and representative event that recognizes significant achievements within the Asian gaming industry. The awarding ceremony in the evening, produced by Asia Gaming Brief in association with G2E Asia and The Innovation Group, aimed to celebrate operators, regulators, suppliers and service providers for their outstanding contributions to the gaming industry.

Here are the winners:

Congratulations to all the winners!