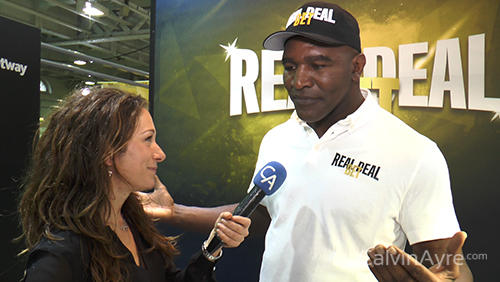 In this interview with CalvinAyre.com’s Rebecca Liggero, five-time champion Evander Holyfield tells us about his relationship with RealDealBet and why he chose to be a part of their organization.

Evander Holyfield is the real deal.

A man not known for being a quitter, the 53-year-old retired in 2014 with the title of boxing’s five-time heavyweight champion under his belt. And now, he’s having the time of his life.

“I think I had fought everybody I wanted to fight. My goal is to be able to [become] a heavyweight champion of the world and I became that five times,” Holyfield told CalvinAyre.com.

Holyfield, who earned the nickname “The Real Deal,” took home a bronze medal at the 1984 Olympics, then went on to clean up the cruiserweight division before challenging the big boys in the heavyweights—Buster Douglas, Riddick Bowe and Mike Tyson. Holyfield said he doesn’t believe in demons, but he believes in reaping the benefits of hard work.

“I don’t know what people call ‘demon,’ but you know, being lazy is a demon. You don’t have to do it, but if you don’t do it, you’re not going to win. And you have a lot of temptations and all that but life is about perseverance. People who could persevere are the ones who usually win,” he said.

And this is one of the reasons why Holyfield has agreed to become the face of RealDealBet, a sports betting platform that offers 1,000 live bet types on more than 18,000 events every month. The platform, which makes use of SBTech’s eGaming platform, also offers competitive odds, large bonuses and quick payouts.

“When it comes down to betting, fighters bet on themselves, so if you’re going to represent somebody, you want to represent a very confident [organization], where you’ll get better odds, because people want to win. [And] their chances of winning are greater with RealDealBet,” Holyfield said.