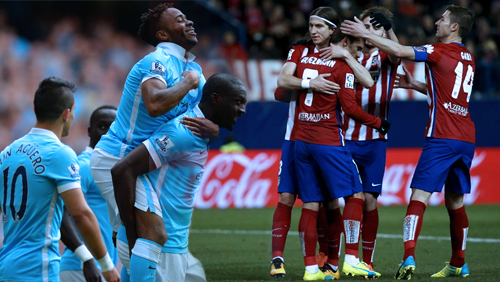 Manchester City and Atletico Madrid have booked their passage into the Champions League quarter-finals after an evening that didn’t produce a single goal in 210 minutes of football.

Manchester City manager Manuel Pellegrini would have wanted two things leading into their Champions League Round of 16 Second Leg tie against Dynamo Kiev – a clean sheet and an injury free night. He only got the clean sheet.

If you were educating an alien and informed them that the Champions League was the greatest club competition in the world, he would have thought you were a Joe Hart short of a football team. The game was littered with petty fouls, stoppages and two Man City injuries that may impede the clubs progress in this competition.

Man City captain and talisman Vincent Kompany limped out of the action as early as the fifth minute after what appeared to be a calf muscle injury. 18-minutes later and City’s other centre-back Nicolas Otamendi also headed down the tunnel. Fortunately, for the blue half of Manchester they had Eliaquim Mangala and Martin Demichelis on the bench and were facing a Dynamo Kiev side who had picked up the wrong script.

Trailing by three goals to one after the first leg Sergei Rebrov’s side came to the Etihad knowing they had to score three times to create the upset of the round. So it was a tad puzzling to see Kiev barely approach the Man City penalty area. In fact, it took them 86-minutes before they had any chance of note.

I watched Leicester City do a job on Newcastle in the Premier League the night before this. With three minutes remaining, the Foxes, herded the ball into the corner flag and ran the clock down. That’s exactly what Man City did in this game, except for 90-minutes. They had a game plan to frustrate and control possession without breaking stride, and it worked.

Joe Hart has now kept three clean sheets on the spin after their hammering away to Liverpool. It’s the first time City has qualified for the quarter-finals of the Champions Club and in doing so, they become only the seventh English club to dive that deep.

I don’t think they will go much further, though.

They look slow, aged and fragile at the back. They would seriously struggle without David Silva, and Sergio Aguero in the side and the absence of Kompany is a huge blow to a team that has nothing left to look forward to except this competition.

PSV Eindhoven’s manager Philip Cocu will be having nightmares tonight after his decision to replace their top goalscorer Luuk de Jong with Luciano Narsingh, with just three minutes of the match remaining, backfired horribly. The substitute was the only player to miss after a second stalemate resulted in a penalty shootout.

After both sides had accrued 100% accuracy with the first 14 penalties, Narsingh hit the crossbar, allowing Juanfran the opportunity to put his side into the quarter-finals and he duly obliged.

Sides Through to the Quarter Finals