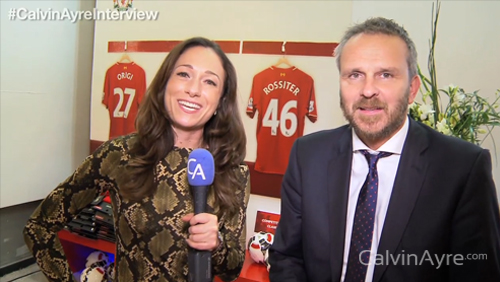 At the Barcelona Affiliate Conference, CalvinAyre.com had the opportunity to meet German football star Didi Hamann at the Banc De Binary booth. In this interview with CalvinAyre.com’s Rebecca Liggero, Hamann describes the momentous night in 2005 when Liverpool emerged victorious over crowd favorite AC Milan.

The year was 2005. The setting: Ataturk Stadium in Istanbul. Liverpool was facing off crowd favorite AC Milan in the final match of the 2005 UEFA Champions League Final. Liverpool was already down to 3-nothing before halftime.

But what happened next was now the stuff of legend, with Didi Hamann at the center of it all.

“There wasn’t an awful lot to say because we played against arguably the best team in Europe at the time, AC Milan. And usually, when you’re down one or two, it’s a big task to come back,” Hamann told CalvinAyre.com. “We had a little bit of hope. I wouldn’t say we did believe we could do it, but yeah, the manager just said we make a change.”

The manager, Rafa Benitez, turned to Hamann at halftime, and “The Kaiser” came off the bench to help inspire the greatest comeback in football history. In the second half, Liverpool scored three goals in a dramatic six-minute spell, leveling the scores at 3-3 and leading the two teams to a penalty shoot-out, where Liverpool emerged with their fifth European Cup.

“The reason me coming on was to move Steven Gerrard a bit further forward, who coincidentally scored the first goal, which was the most important. And then… [we] just wanted to try and maybe get one goal back and then maybe get another one, so the fans have something to cheer about, maybe make a game of it,” Hamann said. “I didn’t expect for us to score three goals in such a short space of time and win the cup, but yeah, [it was a] memorable night. I think all the players, all the fans, everybody connected to the football cup and [it was] a very epic final to be involved in.”

Now, the 42-year-old footballer is playing for German amateur side TuS Haltern, while his former team, Liverpool, welcomes its new manager, Jurgen Norbert Klopp. Hamann said having a new manager has certainly lifted the mood in and around the field.

“It’s good that the mood changed because I think it’s been pretty depressing in the last few months at Liverpool. I think the fans were a bit disillusioned. That’s all changed now with the new manager coming in,” Hamann said. “I think the future looks pretty bright. The most important thing as I said was that mood changed in and around the field…. The new manager came in who’s got great, great track record at Dortmund.