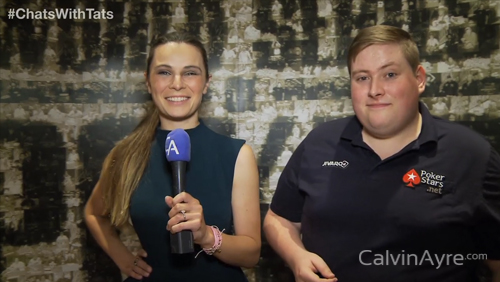 In this episode of Chats with Tats, CalvinAyre.com’s Tatjana Pasalic and Twitch sensation Jaime Staples talk about the challenges of playing poker and streaming at the same time.

How hard is it to play poker and stream at the same time? Not too difficult, if you ask Jaime Staples.

The poker pro, however, admitted that it was the starting out part at Twitch that he found the most challenging.

“It’s an adjustment, for sure. Like, when you first start, it’s kind of like back and forth. You know, you’re losing your spot, you can’t get to everyone,” Staples told CalvinAyre.com. “But it’s worked out to where I think it’s actually easier now to play while streaming, but the beginning, it definitely took an adjustment.”

For his Twitch streams, Staples tries his hand at multi-table tournaments, all while giving points on how to get to the final table.

“I play multi-table tournaments, and that’s basically all I do,” Staples said. “I try to give an inside look into what it’s like to be a tournament grinder, trying to make it to the highest stakes, trying to get on the final table. That’s basically what I do.”

The poker pro said that while streaming came naturally for him, he was scared out of his wits at the thought of putting himself out there for the world to watch.

“The scariest part was just putting yourself out there, you know, like broadcasting your strategy and yourself to the world… but most of the feedback I got was positive, but yeah, that was probably the scariest part in the beginning,” Staples said.

Staples believes streaming is the future of online poker.