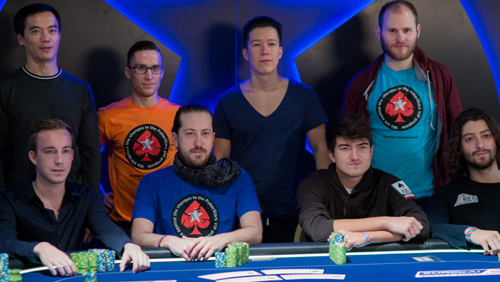 How long will it be before poker organisations start implementing a mandatory dress code for their final tables?

Half of the final table lineup in the €50,000 Super High Roller at the European Poker Tour (EPT) festival in Prague wore t-shirts protesting about forthcoming changes to the PokerStars VIP program.

In the pre-final table photo shoot: Steve O’Dwyer,   each wore a t-shirt with the words, ‘we are against the changes in the PokerStars VIP program,’ surrounding a cracked PokerStars red spade. A tweet from PokerNews report Frank Op de Woerd later showed Igor Kurganov playing with a t-shirt slung over his shoulder.

EPT officials allowed the protest to go ahead. Steve O’Dwyer went on to defeat Max Greenwood in heads-up play to claim the €746,543 first prize. There were several winners photos of O’Dwyer, some wearing the t-shirt, and some not.

The protests came during the same time frame that Eric Hollreiser, VP Corporate Communications for Amaya and PokerStars insisted that the three-day player strike was ‘ineffective’ and they would not be halting their progressions towards the changes.

Protest Shirts Have Been Worn Before

It’s not the first time that players have wore protest t-shirts at the final table of an EPT event. In the €50,000 Super High Roller at EPT11 in Barcelona Olivier Busquet wore a ‘Free Gaza’ t-shirt, and his heads-up opponent, Dan Colman, wore a ‘Free Palestine’ t-shirt in response to the war in those regions.

After the statement had kicked up a social media dust storm, Hollreiser told CardPlayer Lifestyle writer Robbie Strazynski that PokerStars would be changing the rules to prevent a repeat.

“We will refuse entry to any player displaying political statements of every kind,’ wrote Hollreiser.

PokerStars can’t continue to roll out bans for each and every protest that a player makes at a final table. What they can do is introduce a mandatory dress code that removes slogans, advertisements or brands of any kind.

Poker Hall of Famer Mike Sexton has long been an advocate for an improved dress code at World Poker Tour (WPT) final tables. Google images of Anthony Zinno and you get the scope of Sexton’s view of appropriate final table attire.

Alex Dreyfus has also indicated that a player’s sense of fashion is imperative when it comes to coverage of our game either on the Internet or TV. The Frenchman has always insisted that an appropriate dress code is an integral component in events organised by any of his brands.

Maybe it’s time for all organisations to introduce new laws when it comes to choice of clothing, or is it perfectly acceptable for players to use their platform to air their views to the general public?