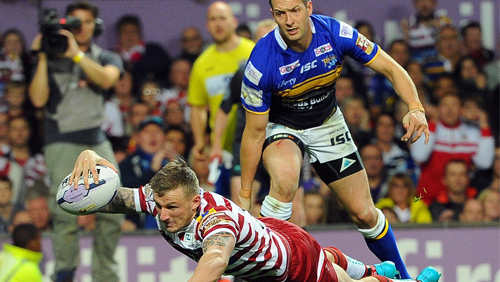 The sponsorship will see the 188BET logo displayed on the front of Wigan’s new 2016 match and replica shirts which will be revealed shortly.
This deal marks a succession of high-profile sponsorship deals from 188BET, who have, in the past, been associated with football, cricket and snooker, and will be well-known to Warriors’ fans, having previously appeared on the shoulder of the Wigan Warriors shirt in 2010.

Wigan Warriors’ Marketing Director Simon Collinson said: “We have a great relationship with 188BET and are delighted to be welcoming them back as the Club’s Official Main Sponsor in 2016.
“As leaders in our respective industries, both the Club and 188BET share a common goal of further growth across the UK. As well as shirt sponsorship, the agreement also includes provision for significant branding at the DW Stadium and representation on the Club’s official digital and social media channels.”

Wigan Warriors are the most successful Rugby League Club in the world, having been crowned Champions on 20 occasions, Challenge Cup winners 19 times and World Club Challenge winners three times.

188BET’s Managing Director Nigel Singer said: “I’m thrilled to announce 188BET’s partnership with Wigan Warriors for 2016. The opportunity to sponsor a leading Rugby team with the history, heritage and standing of the Wigan Club was just too good to pass up. We have sponsored the Warriors in the past, and we’re thrilled to be sponsoring them again for 2016.
“As we continue to grow the profile of 188BET in the UK, we will do everything to ensure that our relationship with the Warriors is rewarding to both parties. The start of the 2016 Super League season cannot come quickly enough!”

188BET is a leading online bookmaker, licensed and regulated by the UK Gambling Commission and the Isle of Man Gambling Supervision Commission. 188BET offers betting in multiple languages on a wide variety of products including Sports, E-Sports, Horse Racing, Financials, Progressive Slots, Casino, Poker and many more.

For more information about 188BET please go to www.188BET.com.

Wigan Warriors Rugby League Club are the number one club rugby brand in the world, with a winning culture, incredible heritage, huge profile and large fan base. Their unique approach to the development of talent combined with world class training and playing facilities, including the DW Stadium, ensure the Club remains loyal to its core values whilst challenging for Super League, Rugby League Challenge Cup and World Club Series honours. For more information visit www.wiganwarriors.com.