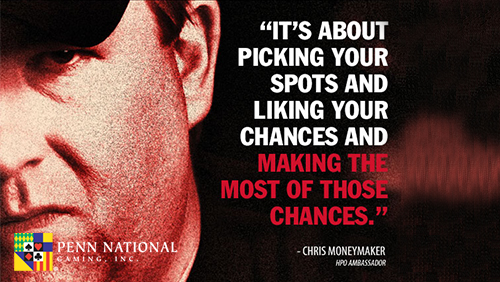 WYOMISSING, PA, October 5, 2015 – Penn National Gaming, Inc. (NASDAQ: PENN) (“Penn National”) announced today the schedule for Season 4 of the Hollywood Poker Open (“HPO”). Penn National’s HPO tournament series kicks off with the first regional tournament beginning November 12th at Hollywood Casino Lawrenceburg and will conclude in June 2016 with the Tournament Championship at the M Resort in Las Vegas, Nevada.  The guaranteed prize pool for the HPO has tripled each year since the inaugural 2012 season and the prize pool for Season 4 is expected to be the largest ever with an estimated Championship Tournament prize pool of over $2 million.

Poker players from across the country will compete for the HPO’s big money prize pools from November through next May at five HPO regional tournament series locations.  Promotions are planned for each regional tournament series location (see schedule below) and the Tournament Championship. In each of the past three seasons, Penn National properties across the nation sent more than 200 “seat winners” to the HPO Tournament Championship in Las Vegas.

“Interest in the HPO continues to grow as it becomes more and more competitive and exciting,” said HPO Tournament Director Bill Bruce.  “As we have in the first three seasons of the HPO, our regional tournament series will determine hundreds of winners that will compete in the Tournament Championship in Las Vegas. The HPO tournament series attracts all levels of poker players with fields featuring a diverse mix of traveling poker professionals and local promotion winners.  The HPO offers our regional gaming patrons a tremendous opportunity to compete for large prize pools and the chance to be crowned the ultimate champion.”

This past June, Kevin Stammen of Coldwater, Ohio outplayed nearly 700 other players from across the United States and around the world to pocket nearly $350,000 as the winner of Season 3’s Hollywood Poker Open Tournament Championship. Stammen is expected to defend his title in Season 4 against an impressive list of ranked poker professionals, rising stars, and seat winners from Penn National properties across the country.  He will also have to fend off HPO host and poker legend Chris Moneymaker.

“I’m thrilled to have the opportunity to host the Hollywood Poker Open tournament series,” said Moneymaker.  “Each year the HPO continues to grow and further cements its reputation as one of the leading poker tournaments in the country.”

This press release contains forward-looking statements within the meaning of the Private Securities Litigation Reform Act of 1995.  These statements can be identified by the use of forward looking terminology such as “expects,” “believes,” “estimates,” “projects,” “intends,” “plans,” “seeks,” “may,” “will,” “should” or “anticipates” or the negative or other variations of these or similar words, or by discussions of future events, strategies or risks and uncertainties, including future plans, strategies, performance, developments, acquisitions, capital expenditures, and operating results.  Actual results may vary materially from expectations.  These forward looking statements are inherently subject to risks, uncertainties and assumptions about Penn National Gaming and its subsidiaries, and, accordingly, any forward looking statements are qualified in their entirety by reference to the factors discussed in the Company’s Annual Report on Form 10-K for the year ended December 31, 2014, as well as any subsequent Quarterly Reports on Form 10-Q and Current Reports on Form 8-K, each as filed with the United States Securities and Exchange Commission.  The Company does not intend to update publicly any forward-looking statements except as required by law. In light of these risks, uncertainties and assumptions, the forward-looking events discussed in this press release may not occur.