Aaron Mermelstein has won his second World Poker Tour Main Event title in successive years after beating 337 players to the punch in the inaugural event at Maryland Live.

Mermelstein was cashing in only his third WPT, and he has now won two of those. Last year, he topped a field of 989 entrants to capture the $712,305 first prize at the WPT Borgata Winter Poker Open, and his win in Maryland makes it title number two. 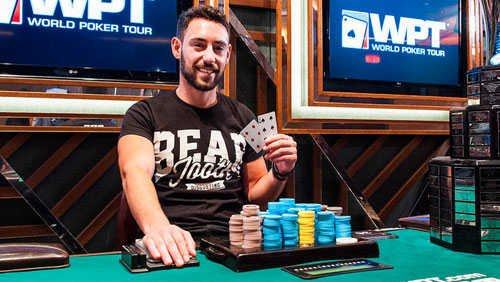 A compact and bijou looking 337 players entered the event, and Mermelstein picked up $250,222, and a seat in the season-ending WPT World Championships, after taking down the final table in less than three hours. He has now earned over $1.2m in live tournament earnings.

Former World Series of Poker (WSOP) Main Event winner, Greg Merson, started the final table as the chip leader with Mermelstein in second. The man of the moment, however, was Andjelko Andrejevic.

Check this out, all in the month of September.

How would he fare in this one?

Let’s find out shall we?

It took 10-hands for the final table to appoint its first victim. Ken Holmes and the aforementioned Andrejevic clashed in a fatal blind skirmish when the [Js] [7h] of Holmes failed to beat Andrejevic’s pocket eights.

The snowmen were at it again 31 hands later. Once again it was blind on blind action, and this time Cate Hall exited in fifth after her [Kc] [5s] failed to find a second king to overpower the pocket eights of Xin Wang.

Former World Champion, Merson, would hit the rail in fourth. He defended his big blind, in a hand against Mermelstein; called a flop bet, and then jammed the turn on a board of [Ts] [4c] [3d] [9d], holding [Tc] [8c], and Mermelstein called holding pocket Jacks – the river bricked.

That scalp gave Mermelstein 80% of the chips, in three-handed play, and the tournament reached heads-up after Andrejevic picked up his third six figure score of the month after being eliminated at the hands of Wang [Kd] [6d] < QQ.

Despite Wang eliminating Andrejevic, he still faced a 4:1 chip deficit against the WPT Champions Club member. He was never able to turn the tide. Mermelstein’s pocket sixes beating the [As] [8s] of Wang to become a two-time WPT champion.

*Including a seat in the WPT World Championships