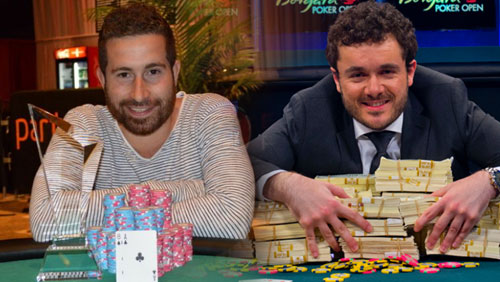 Jonathan Duhamel and Anthony Zinno are amongst the winners in the side events at the World Poker Tour Borgata Poker Open in Atlantic City.

The World Poker Tour (WPT) Borgata Poker Open Main Event is in full swing. 1,027 players will ensure another bumper pay day for one lucky lad, or lady, and two of the games biggest stars have been helping themselves to a few chunks of

cash in the side events.

The 2010 World Series of Poker (WSOP) Main Event champion, Jonathan Duhamel, continues an impressive run that has seen him win three events in a three of the world’s top poker events.

At the start of the year, the French-Canadian picked up the $116,738 first prize after winning the $5,000 No-Limit Hold’em (NLHE) 8-Handed side event at the PokerStars Caribbean Adventure (PCA). A few months later he would lose his sponsorship with PokerStars, under strange circumstances, but would rebound by winning the One Drop High Roller for close to $4m at the WSOP.

Duhamel is a live tournament sensation and over the weekend he won $70,990 after bested a field of 287 players in a $1,090 NLHE Six-Handed event at the Borgata. It was the first time he had won an event at that location. He beat Denis Gnidash in heads-up action. Christian Harder finished 12th, Daniel Buzgon 13th and Justin Liberto 19th. The tournament easily met its $200,000 guarantee.

Duhamel has now earned $16.9m in live tournament earnings and ranks 10 in the all-time money list. He currently ranks #23 in the Global Poker Index (GPI).

Zinno Wins his Fifth Tournament of 2015

Reigning WPT Player of the Season, Anthony Zinno, has also picked up a trophy in a side event at the Borgata.

Zinno picked up $24,442 for victory in the $1,090 Heads-Up Championships. 64 players entered and Zinno defeated Catherine Dever in the final.

Zinno is currently ranked #3 in the GPI and is the favorite to win the GPI 2015 Player of the Year award; a race he currently leads ahead of Byron Kaverman in second place.