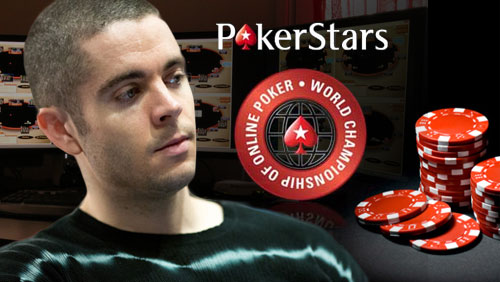 He has just tripled that score.

PokerStars created a little piece of history when they organized WCOOP Event #47: $51,000 NL Hold’em (8-Max Super High Roller). It was the largest-ever online tournament buy-in. It attracted 46-entrants, and yes, you’ve guessed it, Tollerene outlasted them all on his way to a pile of cash that could fill a sizeable crater – $616,518.34.

This sonic boom of an event was held three-quarters of the way through the 70-event schedule. $51,000 is a lot of cash, but only 23 of the 46 players took their seats in time for hand one. In fact, it took over four hours before all 46 had settled down in front of their laptops, tablets and phones. One of those latecomers was Mike ‘Timex” McDonald. It didn’t bother him. By the end of the day he finished as the chip leader, with eight remaining.

Only six players would divide the $2.3m pie. That meant two would suffer from various stages of anaphylactic shock. The first to leave the table in pain was cuffme. He got it in 99

The bubble boy was David “dpeters17” Peters, and it was a tough way to exit. He got it in good [As] [Ks] v [Ac] [Qd] of Nikita “fish2013” Bodyakovskiy, but the board contained more clubs that Captain Caveman’s garden shed, and the flush was good enough to send Peters to the virtual rail with nothing but a $51,000 hole in someone else’s pocket to show for it.

The first player to leave with cash in his pocket was the reigning WCOOP Main Event champion Fedor “CrownUpGuy” Holz; the Austrian native running pocket fives into the A7 of Bodyakovskiy, only for a seven to show up on the river to end Holz’s journey.

Next the tournament lost the starting day chip leader Mike” Timex” McDonald. He moved all-in on the river, on a board of J742K and was looked up by Jose Angel “Cejakas14” Latorre. Timex tabled QJ, but the dominating AJ handed the Spaniard the chips, and ushered Timex out of the door.

Three hands later and we lost Nopaleva, but any finish was a great finish for the player who qualified for this event via the WCOOP VIP Bash – a cash free event that only needed FPPs to enter. The FPP king moving all-in from the small blind, holding T6s, only for Tollerene to make the call in the big blind holding A8; an ace on the flop handing Nopaleva a $230,000 consolatory kick in the ass.

The final three players asked PokerStars to rack up the ICM numbers. All three were happy with what they saw. There was $20,000 left in the middle to play for and that ended up in the virtual account of Tollerene after the eliminations of Bodyakovskiy and Latorre.

Bodyakovskiy finished in third place when he lost a flip against Latorre, and it was a cooler that settled things in the following manner, once the game entered the heads-up phase.