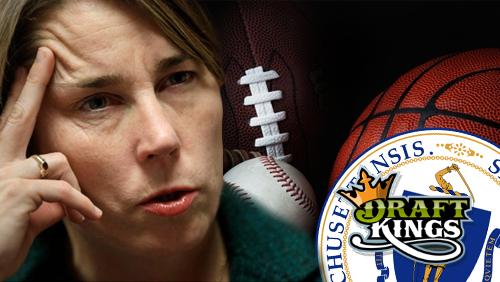 The explosive popularity of fantasy sports has certainly caught the eye of many political bigwigs. This time, it’s Massachusetts Attorney-General Maura Healey who has initiated a review on the legality of daily fantasy sports site DraftKings.

“The point is this: This is a new industry. It’s something that we’re reviewing, and we’ll learn more about it,” Healey told the State House News Service.

But the attorney-general later explained that it was DraftKings that approached her office and initiated the inquiry.

News site WWLP.com quoted Healey saying the daily fantasy site wanted “to reach out and talk to us about the new industry, so we heard them out, we’re hearing them out on it, and as I said, we’re just looking to learn more.”

DraftKings, and its archrival FanDuel, are two of the daily fantasy sports platforms currently enjoying popularity across the United States, thanks to the increased promotion and coverage of DFS products throughout national TV broadcast networks. In fact, the two sites spent a combined estimate of $31 million to drive many football fans crazy during the NFL first week.

The ad blitz has certainly caught the eye of New Jersey Rep. Frank Pallone, who said the DFS sites are already ripe for a Congressional review. Online sports gambling is outlawed under the 1992 Professional and Amateur Sports Protection Act (PASPA), but daily fantasy sports operate under a carve-out in the Unlawful Internet Gambling and Enforcement Act (UIGEA). Incidentally, Pallone has been working tirelessly to end PASPA’s rule in his home state, to no avail.

Because of these reviews, the future of the DFS industry is in dire situation, particularly in Massachusetts.

As the state’s top law enforcement officer, Healey wields considerable authority. But Healey is also known for actively opposing gambling expansion in the state, even going as far as urging the gambling commissioners to consider capping ATM withdrawals and forbidding credit card cash advances in Massachusetts casinos. Recently, the attorney-general tried to block Steve Wynn from building a $1.7-billion casino in Everett.

Through the AG’s website, Healey said that she “is committed to using its full civil and criminal authority to ensure that the gaming industry is held to the many financial and legal commitments it has made to our state, host and neighboring communities, and the people of Massachusetts.” Healey’s inquiry on the legality of DraftKings is certainly in accord with that statement.

DraftKings and FanDuel are insistent that they can’t be considered as gambling websites because they offer games of skill. Gambling or not, however, it’s already obvious that a shadow has already fallen on the fantasy sports industry, and when the government gets involved, it will be next to impossible for companies to turn a profit off it.

In some ways, the rise of DFS popularity in the United can be compared to that of online poker. Like poker, daily fantasy sports has gained a following among players looking to get rich playing a game, but it has also caught the unwanted government attention in the midst of a murky legal landscape, which could lead to what could possibly be the worst-case scenario for the industry—that DFS will suffer the same fate as online poker in the U.S. and have its own black Friday moment.