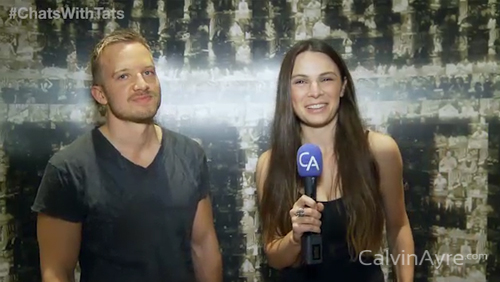 In this episode of Chats with Tats, 2014 WSOP Main Event champion Martin Jacobson looks back on his crazy, successful year and also shares some advice on how to conquer this year’s November Nine.

The Swedish pro, who was also the 2014 poker world champion, said there has been very little change since he won last year’s final table.

“It hasn’t changed that much at all,” Jacobson told CalvinAyre.com. “I didn’t really know what to expect after I won, like how it would affect my life. But apart from a few, like, more media attention, stuff like that, it hasn’t really changed much. I was still playing the same tournaments I was playing before. I still play poker.”

But it has been a very eventful year for the 28-year-old poker player. Last February, Jacobson donated $250,000 to non-profit organization Raising for Effective Giving, a community of poker players who want to make a positive difference in the world.

Also in February, Swedish publication Poker.se named Jacobson as its player of the year. He joined the ranks of other high profile players such as Viktor Blom, Chris Bjorin and Robin Ylitalo.

Now, the world champion has several pieces of advice for the players of the upcoming November Nine event.

“Take a week or two off, and just relax and enjoy the moment, but then, start planning straightaway and start preparing,” Jacobson said.

Looking back, Jacobson admitted he did a lot of intense preparations and planning before last year’s main event.

“I did a lot of preparation actually, probably more than anyone,” he said. “I contacted all my friends and asked their opinion and advice [on] how they thought would be the optimal way to prepare. And then we just started brainstorming and we set up online simulation so we could practice real time events of situations that might come up and discuss them afterwards, and come up with, like, different strategies and discuss the opponents, like, what their tendencies are and what their gameplans’ might be and what my gameplan should be.”

And having that gameplan is what probably helped Jacobson snag his first bracelet.

“You never feel a hundred percent ready, but I feel like I was pretty close to my top level, like, what I could’ve pictured myself achieving at that point, so I felt really ready once the day come,” Jacobson said.