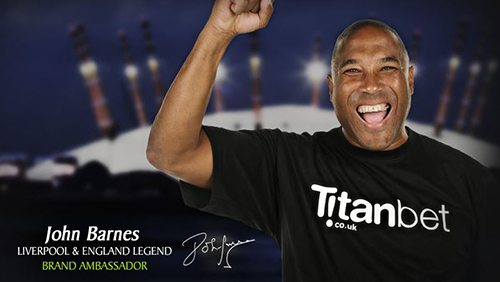 Titanbet.co.uk is delighted to announce that former England and Liverpool winger John Barnes will be our Brand Ambassador for the 2015/16 football season.

A mercurial and mesmerising talent during his playing days, Barnes will bring flair to this season with his engaging and authoritative views on a range of football’s hot topics.

Barnes will offer his thoughts on the Premier League on a weekly basis, along with weekly tweets from his official Twitter account, during what is certain to be an enthralling season at the top and bottom of the table.

He will also deliver a weekly blog and audio where he will provide his predictions on the upcoming matches, as well as his thoughts on his old club, Liverpool, where he enjoyed 10 years as a player.

In addition to commenting on events on a wide range of games, Barnes will also be speaking about the international scene with England ahead of Euro 2016 at the end of the season and there will be public appearances by him on behalf of Titan Bet.

John Barnes said: “I’m delighted to be working with Titan Bet for a second year. I’m looking forward to seeing what unfolds in what is sure to be an exciting Premier League season and hope I can help punters win some money in the process!”

Russell Yershon, UK Sports Manager for Titanbet.co.uk, said: “We are delighted to be working with John Barnes again during this season as our association fits with our UK strategy perfectly. His views are well respected by fans and this helps us to further enhance our reputation as a competitive UK operator.”

Barnes is one of the most talented footballers to have played for England, winning 79 caps during his career and playing at two World Cups, as well as a European Championship. He also scored one of football’s most memorable goals when he dazzled the Maracana Stadium in Brazil with a stunning solo goal in 1984.

At club level, Barnes started his career at Watford before his decade at Liverpool, where he won the league title twice, the FA Cup twice and the League Cup. He was also named the FWA Footballer of the Year on two occasions and was voted PFA Player of the Year in 1988.

Titanbet.co.uk is powered by the world’s largest online gaming software developer Playtech, a publicly-traded company on the London Stock Exchange (PTEC.L). Titanbet.co.uk customers can expect an exceptional and fully-customisable betting experience. Our mobile product is second to none and offers sports betting opportunities on the go – anytime, anywhere. We’re proud to offer early pre-match betting lines, exciting live bets, and some of the best odds on the market. All staff live and breathe sport, and their mission is to offer UK-based sports enthusiasts a top of the line sports betting experience.