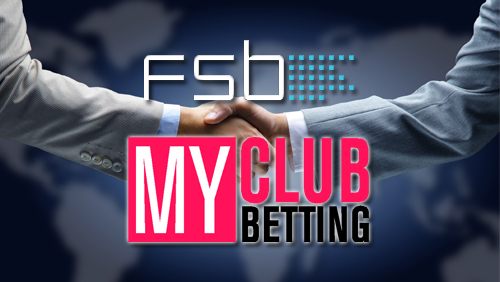 The deal will see FSB trade an increasingly diverse number of sports, both pre-match and in-play, for the operator, including their market-leading UK horse racing product.

MyClubBetting.com has the ability to provide a white label affiliate solution to over 100,000+ grassroots sports clubs throughout the UK. The firm will be able to create a bespoke front end for their customers while utilising FSB’s APIs and their UK licence.

My Club Betting CEO, Bernard Casey said: “We are delighted to partner with FSB Technology, which is an exciting step forward for the company, as their managed sports betting service includes a proprietary live sports betting platform and real-time algorithmic pricing models.

“My Club Betting, in association with FSB, have now developed a service that we feel will offer a much better customer experience and help provide sports clubs and organisations with everything they need to generate their own revenue stream.”

FSB’s business development director, Richard Thorp, said he was delighted with their new partner, My Club Betting, and looked forward to the launch of their new Sportsbook, which is due to go live shortly.

He added: “The flexibility of our platform is great for My Club Betting and we’re delighted to be supplying them with our fully-managed service.

“As well as a diverse range of data feeds, a top trading team and a wide variety of sports, they will also have our modern CRM tools at their disposal which will allow them to tailor offers to specific customers.” FSB Tech’s managed service includes a proprietary live sports betting platform, real-time algorithmic pricing models and CRM tools for player segmentation and bonusing.

The company has an agreement with Sporting Solutions to include their in-play offering in the company’s managed service.

ABOUT MY CLUB BETTING

MyClubBetting.com Ltd (MCB) (www.myclubbetting.com) is a specialised marketing communications and technology company, providing a free betting service to any club, from elite to grassroots level. In minutes, MCB can supply any sports club with its own betting service featuring its own club logo, colours, and social media links on a desktop, tablet, or mobile phone.

The service enables clubs to retrieve a percentage of bookmaking revenues, which also aids grassroots funding. Partners supply the events, prices, and bookmaking services that provide this unique service. Supporters deal directly with these partners, opening an account with them and placing bets with them, whilst MCB manages the club relationships.

MCB has contracts with six Super League clubs. These are include Leeds Rhinos (also ground-sharing with Leeds

Carnegie and included in the contract), Wakefield Wildcats and Huddersfield Giants (both with shirt sponsorships),

Doncaster – which incorporates Doncaster Rovers and Doncaster Knights. MCB is also a stand sponsor at the

Keepmoat Stadium and is the official shirt sponsor of the Wales Rugby League international team as they prepare for the 2017 World Cup Finals in Sydney.

FSB Technology (UK) Ltd’s (www.fsbtech.com) vision of sports betting’s future helped them win gaming’s inaugural Launch Pad competition in 2008. The company has attracted investment from a number of the industry’s most respected entrepreneurs and earned contracts with some of the world’s largest casino and media companies.

Its modern, proprietary sports betting platform was designed for the technical demands of live betting. The software includes an automation layer to manage raw data feeds, proprietary live pricing models, bet placement and liability management software, and customisable marketing campaign tools. It is designed to reduce both the time and cost required to enter regulated gaming markets. For existing operators, the service can also be integrated into an existing platform to provide a single-wallet.