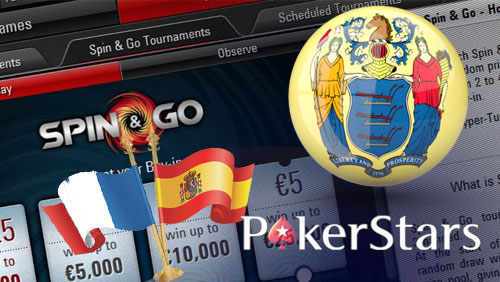 The Lilliputian size €0.25 buy-in three-max hyper-turbo lotteries have been launched as a trial. The French project will end 30 Sep. There is no definitive end date to the Spanish project.

Assuming the new buy-in levels will be a success – and there is no reason why they shouldn’t be – then you can expect the new format to be rolled out globally, as is the usual form in these circumstances.

The decision to launch micro stakes Spin & Go tournaments arrives a fortnight after PokerStars unleashed $100 buy-in Spin & Go games onto the general public. The $300,000 (3,000x) first prize has been claimed twice since its inception. Hungarian players ‘Lev29’ and ‘flesske’ are the first two winners. The losers on each table picked up a nice €30,000 consolation prize.

Whilst €300,000 is a nice chunk of change, it isn’t the highest payout for a PokerStars Spin & Go event. Russia’s “sss66666’, Czech Republic’s ‘Tornado111’ and Canada’s ‘anushan_2323’ won a million apiece during a special promotional period at the turn of the year.

PokerStars introduced Spin & Go games in Oct 2014 after trialing Jackpot Sit & Go games on their sister site Full Tilt. Over 7.3 million games were played within the first 10-days. The iPoker network and Winamax were faster off the mark with their products. Winamax’s Expresso format is the technological daddy of them all.

When will New Jersey residents get the opportunity to experience some Spin & Go action?

In a recent interview with Cardplayer’s Brian Pempus, New Jersey Senator, Ray Lesniak, told him that the licensing debacle should end ‘in short order.’

Lesniak made the comment after explaining to Pempus that Amaya Gaming/PokerStars introduction into the New Jersey online gambling marketplace was crucial if his dream of turning the state into an online gambling mecca were to be realized.

Lesniak also told Pempus that he would not be making any official announcements, regarding running for Governor of New Jersey, until after the presidential elections.