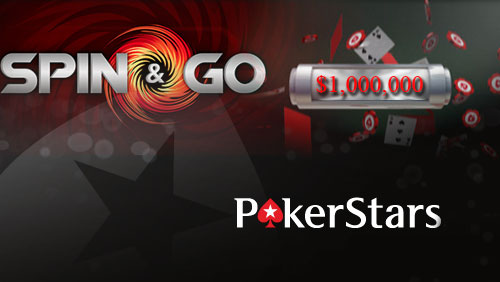 Russian poker player ‘sss66666’ has become the first-ever player to win a $1m jackpot playing in a $5 Spin & Go game on PokerStars.

One sure fire way to attract more players onto your Spin & Go format is to introduce a game where you can win $1m from a $5 investment that takes mere minutes to achieve. An ever-surer way of increasing volume is to actually report that someone has won the $1m.

That’s exactly what happened, just a few hours ago, as the Russian poker player ‘sss66666’ defeated ‘geldduvel’ in one of the sickest heads-up cash disparities in the history of the online game.

The winner must be thanking his lucky stars that the Russian authorities were not successful in their attempts to block Russian players from playing on the site, and the victory is bound to kick up a storm in his homeland.

The $1m jackpot is part of a PokerStars promotion of limited nature. You can only win the $1m top prize through the $5 buy-in structure, and you have a 0.00003% chance of hitting the big one – a whopping 240,000 times your initial investment.

It’s the first time that the $1m jackpot has been hit, and the two other players seated at the table went home with $100,000 each. According to the PokerStars blog, ‘sss66666’ had lost half of his stack after just four hands, but found a double up before eliminating ‘Nonko999’ with [As] [8h] versus pocket sevens.