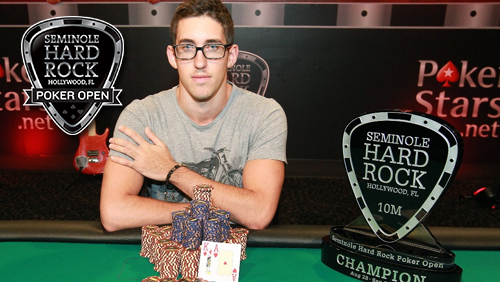 Daniel Colman is in a great position to defend his Seminole Hard Rock Poker Open title after making the final nine as the hosts are once again forced to pay an expensive overlay.

Daniel Colman has once again underlined his ability to navigate his way through huge tournament fields by making the final table of the $5m Guaranteed Seminole Hard Rock Poker Open (SHRPO). Colman will start the final table third in chips; the experienced Randy Pfeifer starts as the chip leader with Paul Volpe also in contention.

The $5,250 buy-in event has fallen short of its guarantee for the second consecutive year, casting doubts over the future of the event. The 2014 $10m Guaranteed SHRPO was a disaster as organizers had to make up the difference of $2.5m – the largest overlay in tournament history.

This year the organizers cut the guarantee by 50%, replaced the re-entry format with a Freezeout, and only 907 turned up to compete in the event. The $4,398,950 prize pool forced organizers to plunge deep into their pockets for a second year with a $601,050 overlay.

The SHRPO is in its third year. Blair Hinkle won the inaugural event by besting a field of 2,384 entrants, capturing the first prize of $1.7m. The aforementioned Colman won the 2014 event after beating 1,499 entrants on his way to the $1.4m first prize. If he does successfully defend his title it will be his sixth seven figure score in the past two years.

It’s not only the organizers being charitable at the Seminole Hard Rock. The players are doing their bit also.

The Charity Series of Poker (CSOP), founded by Matt Stout, raised more than $32,000 for organizations such as Habitat for Humanity, after 232 players competed in the event.

The event attracted stars such as Jennifer Tilly, Phil Laak and Scotty Nguyen; actors Mekhi Phifer, Sasha Barrese and Omar Benson Miller were also in attendance. The eventual winner was David Somers. He defeated last year’s winner Nick Yunis in heads-up action. He was awarded with a seat into the $5,250 SHRPO.