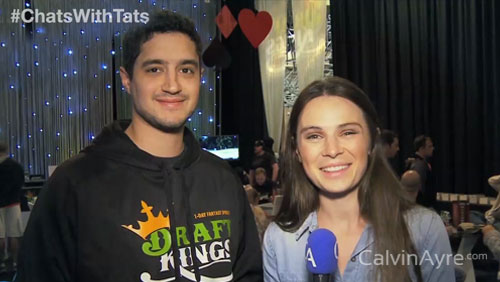 In this episode of Chats with Tats, DraftKing’s Jonathan Aguiar tells CalvinAyre.com’s Tatjana Pasalic how upping the ante on “experiences” can lead to great customer relationships.

DraftKings is adding a new element to its marketing strategy: customer experience.

At the last World Series of Poker, the Massachusetts-based daily fantasy sports operator opened the doors of the DraftKings Lounge, where players can kick back and party in between levels.

“Coming into the World Series this year, one of the things we wanted to do is to give our players, some our new players an opportunity to have a place to kick back and relax in between levels,” Jonathan Aguiar, DraftKings director of customer experience, told CalvinAyre.com. “I think people really appreciate that, and you know, this coming football season when they make their decision about (what) to do with their fantasy sports money, it’ll come back and be a fruitful thing for us. You know, it’s just great relationship.”

A poker player himself, Aguiar said he stumbled upon his new job role when DraftKings started searching for someone who knows what a player wants.

“They were sort of looking for somebody that has a player’s wants in mind, and you know, having been a poker player for years, I just came in,” he explained. “I was just like, this is what fantasy players want, and I have a pretty good idea of what to do with people in terms of events and experiences and integrating with the poker world and all that, so here I am today.”

With Aguiar at the helm, DraftKings started throwing out parties and giving away packages to players.

“We have 50 guys playing the main event this year that won their packages on DraftKings, and you know, in addition to that, we do a lot of great stuff with our other partners, also with Major League Baseball. We have guys throwing out first pitches, taking batting practice at Fenway,” Aguiar said. “Really what we’re all about is connecting people to the sports that they love and giving them the opportunity to fall in love with sports that they don’t even know that they’re gonna love yet.”

Aguiar said DraftKings have even bigger plans for next year.

“(We have) our partnerships with the UFC and Nascar, Major League Baseball, NHL, and you know some potential expansions down the like. We’re firing hard, we’re continuing to grow. (We’re) just at the beginning of the growth curve of fantasy right now, and it’s so much bigger two, three years down the line, so (we’re) just trying to execute on that and get people to love and enjoy fantasy sports and play on DraftKings,” he said.