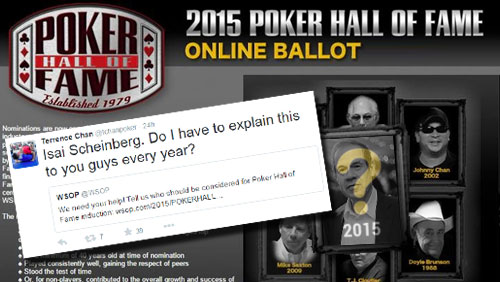 Terrence Chan has responded to a tweet from the World Series of Poker asking for suggested nominations for the upcoming Poker Hall of Fame induction by prompting poker players to join him and vote for PokerStars founder Isai Scheinberg.

Does the World Series of Poker have any balls?

That’s the question being posed by Terrence Chan. A man, judging by his recent MMA YouTube clips, who very definitely does.

“We need your help! Tell us who should be considered for Poker Hall of Fame induction.”

I have a feeling they will wish they never asked.

PokerStars very own Lee Jones was one of the first people to respond to the tweet. This is what he had to say:

“As soon as Isai Scheinberg is in (1) I’ll take the HoF seriously & (2) we can talk about other candidates. Until then, it’s all moot.”

“As soon as a non-American/Canadian is, so will I.”

It seems the choice of Scheinberg is a popular one, and this is where Chan decided to do something about it, after tweeting to the WSOP:

“Isai Scheinberg. Do I have to explain this to you guys every year?”

Chan opened a thread on 2+2 entitled: “Campaign for Isai Scheinberg for the Poker HOF,” proceeded to outline his reasons for the inclusion of the PokerStars founder, why he believed there may forces trying to prevent that from happening, and urging his fellow poker players to vote for Scheinberg in their droves.

Chan wrote: “In my opinion, if the man who has done more to grow poker than any other individual in the world in the past 20 years (at least) is not in the Poker HoF, it is illegitimate.”

The criteria for inclusion into the Poker HoF is:

1. A player must have played poker against acknowledged top competition

3. Be a minimum of 40 years old at time of nomination

5. Stood the test of time

6. Or, for non-players, contributed to the overall growth and success of the game of poker, with indelible positive and lasting results

Scheinberg hits the sixth point with a fairground mallet, but I wonder if his lack of inclusion in previous years is because voter’s minds are so heavily weighted towards players.

Chan thinks there may be other forces at work: “Yes, I know there are political reasons he “won’t”. Caesars does not want to bring attention to PokerStars. Doyle’s friends take precedent. And so on.”

Poker writer and everything else great, SrslySirius, believes the answer lies in the WSOP becoming more transparent about the voting procedure: “Once the secret council shapes the ballot, we don’t know who most of the actual voters are.” Sirius wrote on 2+2. “Once they vote, nobody knows what the count is. Not even the voters themselves. Until this opaque system changes, Isai is never ever getting in, no matter how much you pester Jack and Seth on Twitter. Your ballots are going straight into the trash bin.”

Only pressure will create transparency. The WSOP has shown a tendency to bend towards player power in the past, and if Chan gets his way this could be another case in point.

Chan wrote: “Us poker players have a reputation of outrage without action. So if you agree with this post, click on the link, fill out the form, and nominate Isai. Let’s flood the WSOP with Isai nomination ballots, and see if they have the balls to once again ignore a man who has lined their own pockets with millions.”

If Scheinberg does get into the Poker HoF then it will be the first time in a long time that someone living will not turn up in person to collect the award, not unless he wants to try shining it whilst wearing a pair of handcuffs.