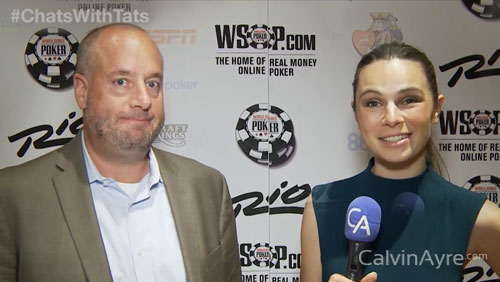 In this episode of Chats with Tats, Caesars Interactive Entertainment’s Seth Palansky talks to CalvinAyre.com’s Tatjana Pasalic about the success of WSOP.com’s first online event at the recently held World Series of Poker 2015.

Summer went by too fast for Seth Palansky.

Just last June, Palansky and his team at WSOP.com were busy gearing up to launch the site’s mobile platform.

“It went by super fast. (It) couldn’t have gone any faster,” Palansky told CalvinAyre.com. “It’s been a fun summer. We had our first online event, and I’m petitioning that we make all events online and just play the final tables out live.”

Palansky and his team initiated WSOP.com’s first online event using their new platform for mobile and tablet on July 2. The online event was tied to the land-based events at the recently concluded World Series of Poker 2015.

“This is going to be the first year (where) you’re going to be seeing players sitting at real live poker tables grinding to win a bracelet, while at the same time, online on WSOP.com, trying to win a seat to tomorrow’s event and other tournament offering,” Palansky said in an earlier interview.

Now that WSOP has ended, at least for this season, Palansky said it’s back to the drawing board for him.

“We’ll take a step back and analyze everything from the summer, get all the feedback from our players, from operations, from the staff and make the decisions going forward. But the online event certainly was successful. I like how fast it went. It went a lot faster than the main event, but it was good,” said Palansky, who is also the vice president of corporate communications at Caesars Interactive Entertainment.

Palansky is also looking forward to the upcoming events this year, such as the National Championship Series and the World Series of Poker Europe.

“The World Series of Poker Europe is coming up in Berlin in October. We expect that to be very big, big festival. We’re doing a colossus type of event there to get things off,” Palansky said.

And then before you know it, it’s already May and everyone’s back in Nevada.

“Or the November 9 first,” Palansky said. “We’ll have these guys play to the final three in November here, and yeah, shortly after, we’ll have our schedule announced and like, get going all over again.”