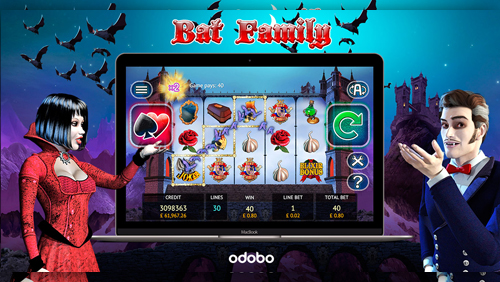 Gibraltar, 29 July 2015 – The hit slot game, Bat Family by Fuga Gaming Technologies, is now available for the first time on mobile via Odobo. The game has been built with a mobile-first approach in HTML5 to service mobile, tablet and desktop play.

The game is well-known in the land-based Italian market having been released in 2011 where it remains a favourite with casino guests. It was subsequently released in the USA and Mexico to similar acclaim and has proven to be an enduring title. More recently, it was launched as a free-to-play title on Google Play (2014) where it has amassed more than 26,000 downloads as a stand-alone game and a rating of four out of five.The Bat Family slot game invites players to spend the night in the mysterious old haunted castle. Inside lives a hospitable family of vampires: the wise father, the elegant son and the glamorous daughter. The game itself is a classic 5-reel, 30-line video slot game, styled as a humorous homage to the old naïve vampire movies and Addams family franchise. It features top-quality 3D-graphics for every pay table symbol and the game’s main characters. The huge variety of payouts in both the base and bonus game modes make for engaging gameplay that has driven the game’s success.The mechanics of bonuses are unique and intricate. Free spins won via the joker symbol and random multipliers can be retriggered up to 99 times making for huge potential payouts. There’s an interactive Elixir bonus game that allows the player to open chests and caskets in the three levels of the castle vault and the player can continue to win until three bonus-ending garlics are gathered or the Super Prize is won. The Mystery Bonus (up to four times multiplier) can randomly trigger and at any time during base game to further increase the value of any payout.Glen Bullen, Partner Success Manager at Odobo, said, “Bat Family is a proven title with undeniable land-based success. It is now available to players online for real money and with as a high-quality mobile product. We’re grateful to Fuga for choosing Odobo to do this. Bat Family is a great addition to the Odobo Marketplace and is on for all devices and within the Odobo Play app for social casino play.”

Konstantin Mikhaylov, Commercial Director at Fuga Gaming Technologies, commented, “The Odobo Developer Program offers the right mix of support, modern tools, technology and cross compatibility. Joining with Odobo was an obvious choice for widening the distribution of the virtual version of the game and opening it up to players in new regulated markets.”

The game supports play on iOS, Windows and Android devices and is available to try for free in the Odobo Play app or online at :http://odo.bo/p/bat-family

About Fuga Gaming Technologies:
FUGA is the exclusive distributor of UMA Premium Group products, which has been successfully developing gaming software for the Italian and worldwide market for many years.

FUGA Gaming Technologies, a fresh face of industry veterans, is a diverse British gaming software provider with clients on both sides of Atlantic and beyond.

FUGA products are created in-house by a highly experienced development team of seasoned industry professionals, focused on quality, effectiveness and results. Every detail counts and all the nuances are accounted for.

About Odobo:
Odobo is the industry’s first HTML5 Developer Program and Marketplace for the real-money gaming industry. The result is a modern, fully distributed and cloud-enabled regulated gaming content solution, devised by industry veterans. Operators license content from over 40 studios via the Odobo Marketplace.Odobo Play is a consumer games discovery channel, offering games for social casino play with the option to play for real-money with regulated operators. Odobo Play is now available as an iOS App.Odobo, based in Gibraltar, is licensed and regulated in the UK and by the Gibraltar Gambling Commission.