Home / Business / Churchill Downs Can Handle Anything, But its Stock Can’t 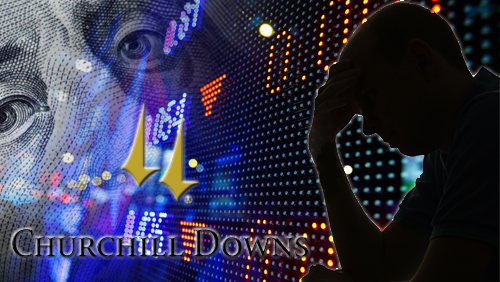 When looking at the latest business moves and financial health of Churchill Downs (CHDN), it all seems to make sense. It looks like normal, savvy business people are doing normal, savvy things, looking to expand where they can, shifting resources to more profitable sections of the business, not borrowing too much money.

Downs has shifted its focus dramatically over the past two and a half years. Racing has gone from 41% of its revenues down to 32%. Casino has gone up from 30.5% to 40.5%. The reason is simple. Casino is more profitable than racing, at least for them. Gross profit margins on racing have been between 15% and 17% since 2012, while gross margins on casino have been around 26-27%. So you can’t blame a company for doing what works and focusing on the better parts of business.

The only problem is, its stock movement makes no sense. From 2007 to 2008, Downs was nearly cut in half from top to bottom. But look at a chart of it now and that walloping looks like a hiccup.

Does this look normal to you? If it does, then you have only been trading for 7 years at most.

Excuses can be attempted for this, such as Churchill is expanding its business into new gambling sectors, growth opportunity, mobile games, Big Fish, Oxford and whatnot, but 150% since 2012? It’s a bit much. Someone is spiking the punch bowl.

While shares have been skyrocketing, earnings are still down since 2012. This is not necessarily a bad thing because acquisitions take time to develop, but the numbers just don’t add up. This is not to say that any of its moves and refocusings have been bad or irresponsible. They have been good, measured, and conservatively financed. The company has proven that it can handle even monster recessions with grace. Revenues did not take a hit in 2008. They actually grew (page 38). Earnings shrunk, but the top line was steady, and that is not an easy thing to accomplish when the financial world is collapsing. Churchill Downs is a bedrock. The company is a good one. The stock, though, will take a big hit once the business cycle turns, just like it did in 2008, even though the company itself withstood the crisis very well.

Sometimes I wish that business executives understood and could see the business cycle they are in from a bird’s eye view. If everyone understood it, the waves created by central banks could perhaps be smoothed out a bit by capitalists, instead ridden into a cement levy. We are now at a big crossroads in the business cycle. Money supply is at a turning point with about four weeks to significantly turn back up, or we are headed for the bust phase. Note this table well, especially the bottom right number: 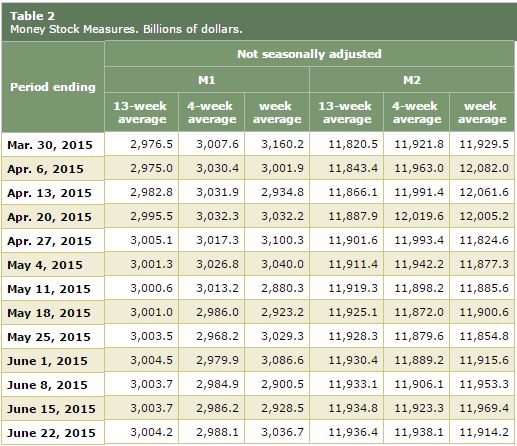 In four weeks, if we don’t start seeing much higher numbers in the final column, total money supply (M2) will have shrunk on average for the whole quarter. If you refer back to the Churchill Downs chart, the big swell since 2012 has been financed by a flood of money looking for an excuse to fall somewhere. Downs is a good excuse, better than most, because it is very well run. But even the best run companies cannot sustain a swell like this when the fuel runs out.

The next two releases will be especially important because it will show whether or not what is happening in Greece and China is in any way affecting the money supply in the US. If it is, we could see a drop back to the $11.8 trillion range, which would almost ensure some kind of crash by late August or early September.

We have seen what Central Bank indecision in China does to a stock market that has been living off printed money for too long. There is no saving it now. And it’s not like this has not happened before. It just happened 7 years ago. Here’s the Shanghai Composite Index since 1990, which topped almost exactly when the S&P 500 did in 2007.

If the folks at Churchill Downs understood how this worked, they would have saved their $885M Big Fish acquisition for two to three months from now and saved hundreds of millions of dollars. And if that opportunity would have passed, many more would have popped up and will again when this boom phase is finished.

If you wait for the bust and make acquisitions then, when other entrepreneurs that were busy riding the wave are desperate to lose weight and sell before they surf into a wall, that would sacrifice some of the boom phase stock gains. If would make that 150% Churchill Downs gain since 2012 look a little less gargantuan, but it would also cut off the fuel on the way back down, cushioning a fall by enabling expansion when everyone else is in a panic. It would also attract what little buyers there are during a bust to your stock if they see you grabbing up companies while everyone else is freaking out.

My call on Churchill Downs for now is, regrettably, to go short. And once money supply starts moving seriously again, cover, wait two months, and go long. The company itself can handle the worst. It has already proven that. But the stock is still bobbing on the surface of the waves.