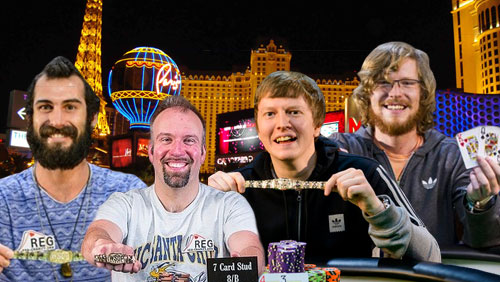 Lee Davy brings you a round up of the main stories from the 39th day of the 46th Annual World Series of Poker, including a shock in the $10,000 H.O.R.S.E Championships, two bracelets for good old Britannia, and a clever little Italian leading the Lucky Sevens.

The melodies of a mass of different songs make a jukebox worth turning on. I understand why the World Series of Poker (WSOP) decided to create the fetus known as the first online poker bracelet. I just don’t agree with it.

One person who couldn’t give a monkey’s about my opinion is Anthony “casedismissed” Spinella. A Playa del Carmen resident – we’ll assume he moved there for the grind, and not THE GRIND – managed to defeat 905 entrants on his way to winning the first online poker bracelet in series history, and the first of his career.

The $859,750 prize pool, and $197,743 first prize, set new records in their respective fields in a US online poker industry that’s started to creep into regulated territory at the pace of a snail with a tack stuck in it’s foot. Did anybody expect anything different though?

I expected more players to participate. The fact that they didn’t leads me to believe that people think, like I do, that there is no place in the WSOP for an online event. That’s why PokerStars invented SCOOP and WCOOP, and didn’t whack them on the tail end of the European Poker Tour (EPT).

There will be plenty of people who will say this was a success. Not only did players compete from all over Nevada, but there were also qualifiers from New Jersey, and globally from Winamax, 888 and PlayNow.

The final table housed some impressive specimens. David Tuthill finished 5th, and Ryan Franklin 6th; in a final table that was over in the time it takes you to watch Star Wars and The Empire Strikes Back.

For the second year on the bounce we have had a surprise winner of the $10,000 H.O.R.S.E Championship. Last year, Chris Wallace was the underdog done good, and this year it’s a 32-year old PhD student called Andrew Barber who fell into the role.

204 entrants created a total prizepool of $1.9m, and according to WSOP reports, Barber ‘obliterated a star-stacked final table’ on his way to the $517,766 first prize.

The term ‘star-stacked’ was dragged out of the thesaurus, as there were eight former bracelet winners in the final 12-players. This included Viacheslav Zhukov (2nd), former WSOP Main Event winners Joe Hachem (5th) and Scotty Nguyen (7th) and the former WSOP POY Frank Kassela (6th).

Barber told the WSOP that he found jet-fuelled motivation after an opponent called him a bad player.

“That really riled me up and got me motivated to win.” Said Barber.

Paul Hoefer Wins the Little One for One Drop

The German’s are officially the second most dominant poker nation at the 46th Annual WSOP, after Paul Hoefer bagged another bracelet for the country where they speak English with all the emotion of that annoying little robot that used to leave me to hacking my bell end off during episodes of Buck Rogers.

It was a dazzling dream for the 24-year old student from Leipzig. He was making his debut at the WSOP and had cashed three times prior to his groundbreaking win.

“There’s no question I ran super good. But I played good, I think. When you play good and the cards hit you, that’s an unstoppable combination.” Hoefer told the WSOP after his win.

Day #39 contained two victories from the British Isles. The first was Alex Lindop. The 25-year old from Stoke-on-Trent defeated 2,155 players to capture the bracelet in Event #59: $1,500 No-Limit Hold’em.

The second Brit to win a piece of gold on Day #39 was Gerald Ringe. He was making his third WSOP cash of his life, and earned more money than the entirety of the eight years he had previously spent racking up scores on the Hendon Mob website with his $180,943 score.

547 entered, $738,450 was raised, and Ringe has become the third British player to win a bracelet this year after the aforementioned Lindop and John Gale.

Jack Duong won the inaugural Bounty No-Limit Hold’em event. He defeated a field of 2,178 entrants to take the first prize of $333,351, and $6,000 worth of bounties. According to WSOP.com some players cashed in 18 bounties, making this event another that will probably become a mainstay for years to come.

Duong has an impressive record at the WSOP. He only started racking up WSOP scores last year, and since then has cashed six times with this being his third final table appearance.

The 26-year old from New Jersey told WSOP.com that he came into this event stuck $75,000, after ‘bricking everything.’

All that has no doubt been forgotten.

Another new, and popular event is the $777 LUCKY SEVENS No-Limit Hold’em event. 4,422 players created a total prizepool of $3m and close to $500,000 are reserved for the winner.

Finally, the first iteration of the $10,000 Dealers Choice Championship has reached its final day of activity. Rep Porter leads the final 12 players, but just look below this sentence to see for yourself how many exciting players remain in that one.