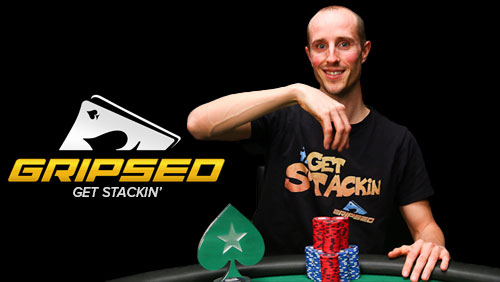 Lee Davy sits down with the creator of the poker strategy and coaching site, Gripsed’s Evan Jarvis, to talk about the importance of intention and preparing yourself for every day activities.

I think it was PokerListings that asked me to check out a kid named Charlie Carrel. Apparently, he had deposited $15 into a PokerStars account and ran it up to over $500,000.

I tracked him down, and during my interview, he told me that a lot of his success was down to one man. His name was Evan Jarvis, and he was the creator of a poker strategy site called Gripsed. Carrel was a coach on the site, and he told me that he would never leave Jarvis, irrespective of who would approach him to work for them.

That is a huge compliment, and by the way, the content on Gripsed is free of charge. Suddenly, I had another man I needed to track down. Fortunately, this one wasn’t that difficult. He has a booth right outside of the Media Room in the Rio.

Charlie Carrel once told me that he would never leave Gripsed, and move to another company, because of the respect he has for you. What did you do to earn that respect?

“One of the big things that comes with my training, that doesn’t come from other training sites, is I try to teach a certain set of values: taking care of yourself, taking care of others, valuing your relationships, and valuing all the activities you do in your life such as poker, business or health. I help people take those things seriously, seeking out people who can help you along that path, and not forgetting those who helped you along the way.

“I did a video where I taught people to find out what it is you wanted to work on, and to find the best people in those fields to help you. Whatever the price is, if you can afford it, you pay it; because you should be at a level where you are getting the value you should be for that price. If you are always investing in yourself, at the right value point, you can get more high-level coaches as you go along.

“He hit me up one day to ask if I knew some higher level coaches. He told me that he hired a guy who was playing $10/20. They spent six hours together, and after the first 30-mins the coach suggested that Charlie take his money back because he knew everything he was trying to teach him.

“I was trying to help people evolve to that next level, and be the best people they could be. A big part of that is valuing the people around you, and not forgetting them, because we really sacrifice a lot to help other people, and all we ask in return is they appreciate it and pass it on to others. A lot of what I did was free. I never asked for any money for the content I made. I wanted to provide for people, and thought karmically that things would work out for me if I did that.”

I have been listening to an audio book on purpose and meaning by Pastor Rick Warren. He talks about being servants, and to give rather to receive, how long have you been operating in this manner?

“Not that long. As I grew up I was very concerned with myself, and when you are growing up, that’s the zone most people are in. There are two parts to this. There is the physical growing up process, and then there is the waking up process. The latter is about seeing the world for what it is, seeing people for what they are, and really getting it.

“I think the waking up stage for me started about 3-4 years ago. I started making videos because it gave me something to do. I was good at talking and teaching, so why not make some videos? But when I started receiving feedback about the value that people were getting I realized that I was helping them get more value in their life. I realized this was the real magic in life. I was getting the opportunity to help people, and then getting to be surrounded by happy, healthy individuals who can bring you up and give you opportunities that you would have never found on your own.

“When I got into meditation I started to quiet the noise and distraction. I was able to understand things for what they were. When I started taking care of myself, and my health, so I could create more energy and share it with other people, life started to get better.

“One day I was in an office of a friend to just chat with him. I walked outside and got a feeling of euphoria. I didn’t understand it. I hadn’t taken drugs, and I hadn’t won any money. Then I realized that sharing, connecting, and making someone’s life a little better is probably the most important feeling in the world.

“Sometimes I lose sight of it. Sometimes the noise returns, but when I get back into the routine, I can analyze my days and see what I did well on the good days, and what I didn’t do well on my bad days. I can honestly say that the bad days are when I haven’t had fresh air or sunshine; I had no body movement, and I didn’t socialize with anyone outside of work related things. Go outside, be in nature, move around, talk and play with friends, eat, sleep and dream – keep it simple. It’s become my normal life default.”

I got angry today and upset someone I love. What advice can you give to deal with this better?

“I think the biggest part to this is trying to come from a place of strength. If we start the day rolling out of bed, slamming the food down as quickly as possible, and running into the first task without taking time to ground yourself, then it’s very easy to be in that frantic reactive state all day long. The biggest tool is being proactive.

“Tony Robbins used to talk about giving yourself five minutes to thrive. He was talking about honoring yourself, reminding yourself that you are important; that your happiness matters; that being relaxed and calm matters. By doing that in the morning you come from a place of peace rather than stress. You aren’t carrying all the bullshit into the interaction, where it’s there, and as soon as something triggers it, it all comes out. It could be exercise, meditation, journaling – you can come into every interaction from a blank slate.

“When I am streaming on Twitch or reading YouTube comments I tell myself that 99% of them have nothing to do with me. They are simply a projection of what’s going on in their life at that moment, and this is the outlet they choose to let it out. That way I don’t take it personally, get reactive or defensive. I can come from a pure and strong place and try to give them the help, answer or humorous response they need. The key in the interaction is not to take anything personally. It’s easier to work through a situation when you realize it’s not about you.

“In cases where this can’t happen, it’s important to defer an issue. They might be disappointed for a little time, but the outcome arising from clearing your plate first, so you can be there for them, is 10-15% better that what would have happened without that space.”

You are making me understand the importance of intention. This morning I woke up, went to the gym, meditated, journalled, and swam…but was I really present during all of that, or was I ticking things off my list?

“Those are the habits that you have developed. Even if you are going through the motions, it’s good that you are going through the motions doing positive things. Before you do the activity take a few minutes to set your intention to remind your mind why you are doing a task, or what you want to get out of it? It’s like poker. If you start playing poker and your intention is only about winning or losing it’s not as powerful as setting an intention to focus on, say, your opponents ranges. If you do this then your brain knows that every time a hand starts it has a job to do.

“The brain is very powerful, but you need to take the time to tell it what to do. It’s about taking the time to speak to it and it will serve you instead of using you. Otherwise the brain will take over and go into habits, or the reptilian brain will kick in and you will become instinctive. The value of taking 30-seconds is so powerful. Just close your eyes and tell yourself three times why you are doing something, and it makes an amazing difference.

“Sometimes the check-list lifestyle can make you feel unfulfilled. It’s not about identifying the things that you need to do. Take a rest every week. Ask what are the most valuable activities that you should be doing this week? Some days it may be important to deviate. Listen to your body. Sometimes you might need to sleep in. Honor the mind and body. The worst thing you can do is create guilt because you aren’t doing something you think you should be doing. Recharging and rejuvenating is the only way we can identify the activities that will provide the maximum fulfillment, satisfaction and feeling of accomplishment, as opposed to the task list mentality. I have found some of my greatest growth and feedback comes after I have taken a break.”

You can learn more about Evan Jarvis and his coaching at Gripsed.com.

Is Jungleman leaving poker behind?
Paul Seaton
35 mins Ago