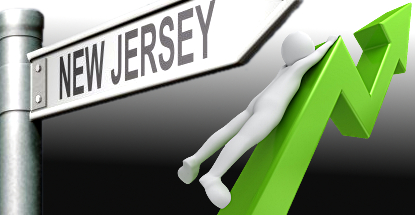 New Jersey’s regulated online gambling market was up nearly one-fifth in May although total revenue dipped slightly from the previous month.

The market-leading Borgata/Bwin.party/Pala Interactive combo reported online revenue of $3.96m, essentially unchanged from the previous month. The Borgata earned $2.86m from casino and $1.1m from poker, with each vertical also relatively unchanged from April’s results.

The Golden Nugget’s casino-only site generated $3.06m, down about 10% from April, but still nearly five times what the site generated in the same month last year.

Caesars Interactive Entertainment ranked third on the revenue chart, earning just over $2.6m. This was down 7% year-on-year but up 6% from the previous month, which saw CIE slip from its perennial number-two ranking all the way down to fourth. Online casino generated $1.79m while poker contributed $832k.

The Tropicana’s Gamesys-powered casino-only site earned $2.5m, down 7% from April but up one-third from the same month last year. Resorts Casino Hotel’s casino-only site, which launched this February, earned just under $325k. That’s up around 50% from April’s total, which was itself up 50% from March’s tally. Resorts continues to wait patiently for the New Jersey Division of Gaming Enforcement to get around to approving Amaya Gaming’s quest for a license for its PokerStars brand, which has a prospective online poker deal with Resorts.