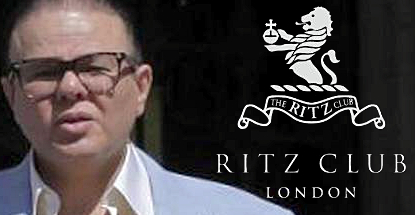 According to the suit, Al Geabury (pictured) ran up £2m in losses during a single night of play at the Mayfair casino in February 2014. Geabury, a member of the club since August 2012, gave the casino a check to cover his debt, but the check bounced when casino staff attempted to deposit it the following day.

al Geabury has since refused to honor the debt on the grounds that the casino understood – or should have understood – that he was a gambling addict, yet Al Gaebury claims the casino took no steps to limit his gambling activity. A full hearing on the suit is scheduled for the end of June and High Court Justice Simler has already commissioned a psychiatric report to determine Al Geabury’s conduct on the evening in question.

The Ritz Club says Al Geabury’s debt now includes £200k in interest, which is growing at £400 per day. The casino has been down this same road before, having sued 10 welchers last year alone, including the wife of Oman’s foreign minister, who last August was ordered by the High Court to honor her own £2m marker.

CROOKED CROUPIERS CONFESS
Meanwhile, the Coral Island casino in Blackpool has seen justice prevail following the convictions of two roulette croupiers. Craig Walker and Daniel Johnson were jailed this week after confessing to fixing the game so that the ball would stay on the same slot while their accomplice Kevin Traynor bet appropriately heavy wagers on the predetermined ‘no spin’ outcome.

The three men pled guilty to fraud after CCTV footage showed them engaging in the scam on at least eight separate occasions beginning in November 2014. In total, the casino was conned out of over £23k. Walker and Johnson were sentenced to 14 and 12 months respectively, while Traynor received a suspended sentence of nine months and 200 hours of community service.

The Sky is Not Falling on Genting Singapore
Rafi Farber
1 December 2015
.