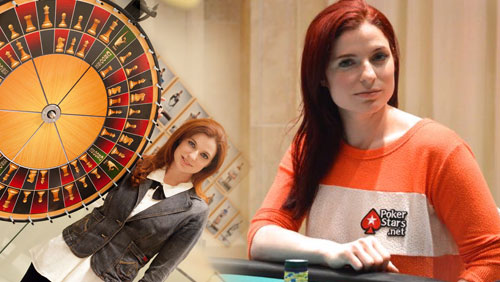 Lee Davy sits down with PokerStars’ Mind Sports Ambassador, Jennifer Shahade, about multi-tasking, the Man v Machine match in Carnegie, and much more.

She is a very successful author, consults for the United States Chess Federation, is the PokerStars Mind Sports Ambassador, and when she has a few spare minutes of downtime, she slips on a red dress and plays chess against 20 different people whilst hula-hooping.

And here I was, considering writing an article about the dangers of multi-tasking when playing poker. I was debating the idea of talking and playing. I never even considered the red dress and hula hoop. Tomorrow, I plan to play a game of poker, dressed in suspenders and stockings, whilst jumping up and down on a Space Hopper. All in the name of research, obviously.

Until then, check this out.

What does a PokerStars’ Mind Sports Ambassador Get Up To?

“I go to a lot of tournaments and help them with their chess initiatives. We are running The PokerStars Chess International on the Isle of Man. It’s the second year we will be running it. There are a lot of poker players who enjoy chess, and we are seeing what we can about that.”

Talk to me about your Ted Talk in Baltimore

“They said I could talk about whatever I wanted, but I assumed they preferred me to talk about poker and chess. They gave me some public speaking lessons as well which was interesting. They really want you to do well. It’s free coaching, and it helped me a lot.

“I was very nervous, but that’s okay. Butterflies are normal. If you have butterflies going into a poker tournament that’s normal…it’s nothing to be worried about. Hopefully, you aren’t going to display it outwardly, too much, and instead keep it internal. It’s not great to tell everyone at the table that you are nervous.”

I was about to write an article about the value you lose when multi-tasking and then I see you hula-hooping whilst playing 20 people at chess. What is your opinion on multi-tasking?

“You have to find that balance, both in life and poker. You don’t want to get bored, and it’s unlikely that you will spend 12-hours playing full ring and not talk to people. Would you even want that? Yet if you were talking all of the time then that would affect your game. It’s a balance that I am still working on. You get a talent for realizing when something is about to happen and divert your attention accordingly.

“It’s frustrating when you see this huge check-raise on the river, there are a ton of chips in the pot, and you have no idea what has been going on? But if you play for 10-hours, are you going to get bored if you are focused on nothing but poker all day – that’s a lofty goal.”

I have difficulty remembering everything when I have to note down hands for my friends to analyze. Give me some tips.

“You have to learn to prioritize, and that’s a skill that’s valid in so many aspects of life. If you are spending the first level wondering how many chips everyone has, then you are wasting energy. But if you are doing the same thing when the antes have come into play, there are different stack sizes, and you are figuring out ranges, then the energy you apply to that moment is important.

“When you are playing full ring, you should definitely pay attention to the players to your immediate left, and look at showdown hands, because those are the people you are going to be playing with the most. Also, if you see an inexperienced player at the table, you have to be very attentive to what they are doing. That’s where your money will come from. Watching their game and taking advantage of their weaknesses.”

What’s your opinion on the recent Man v Machine game?

“Starting with poker, I think it’s a terrible thing. It’s horrible. People need to start studying other forms of poker, and quickly. I think live No-Limit games will be around for a long time, but it’s horrible for the No-Limit game. It’s fascinating to watch, but it’s also bad for the game. It’s like watching a car crash. I have seen the same in chess and it’s not a good thing.

“In terms of how artificial intelligence will affect our lives, I don’t have enough scientific expertise to say if the danger signs are valid or not. This whole robots taking over the world thing seems a little too Hollywood for me, so I haven’t put too much thought into it. I worry more about things like climate change, or my four-bet range to be honest. Your brain only has so much space, so be careful what you apply your thinking to.”

What waste fills your mind?

“I think about food more than I should, especially before the dinner break. I think about a lot of girly stuff. There are things that women are interested in that guys might think are a waste of time, like buying shoes. I think it’s important for people to have frivolity in life. Women getting their nails done, or shopping, or guys watching sports – that light stuff is important in life.

“I spend a lot of time alone so sometimes my mind spirals out of control. I don’t like thinking about negativity. I’m talking about the little jabs that people give to you. I know it’s a cliché, but the important thing is to just reduce the amount of time you think about that stuff. If there is a forum where people are talking crap about you, then don’t visit. If you have a friend who talks behind your back, then don’t talk to them. There are always easy actionable things we can do to change our situation.”

How do you handle criticism?

“I usually only care when I partly agree with a part of the critique. I am very honest and analytical with myself. If someone says something off base it doesn’t affect me. So if someone says something nasty and off field I can’t be offended by it. But if it has that little sting of accuracy about it, then that’s tough to take. That’s what hurts. It’s the things that are true in a way. It’s like playing a hand badly, and someone is smart enough to notice, and they call you out. That hurts. But if someone bad at poker criticizes you, you can’t get hurt by that.”

Do you feel the need to be special?

“I think so. You can see I like a lot of attention by the way I live my life. That’s good, I’m a public figure, and it makes sense. It would be hard if I hated attention and be in the spotlight. But the flip side is you do care what other people think.”

Why have you become so successful?

“Like all successful people, I got lucky. On one hand I am a people person, but on the other hand I spend time studying what I am working on. That can be a challenge. You have to be conscious about setting aside those nights. One of my favorite bloggers is James Altucher, and he has this book called ‘The Power of No” where he explains that for entrepreneurs and successful people NO is the most powerful word. You can’t say yes every single time and hope to be successful.”

What holds you back from achieving more?

“I’m a little spread out. I wish I could change that about myself, but it’s who I am and I deal with it. Recently I have been very spread. I am doing Open Face videos for RunItOnce, I am doing work for the United States Chess Federation, and also work for PokerStars. It’s all a blast, and that’s why I don’t want to give any of it up, but you have to be diligent enough to make sure you do it all well.

Do you suffer from FOMO?

“Yes there’s that, but it’s also important to be diverse in this world. I’m not that diverse in poker. I am mostly playing NLHE tournaments, a bit of cash and Open Face. It would be better if I played more games, but I am doing these other things as well. You need to have more income streams coming in. You need to be like Jason Mercier, a player who knows every game. If the AI comes in and figures out NLHE, Jason Mercier will be fine because he will adapt. Everyone should start to learn to diverse. Not just in poker, in life as well; figure out what you are good at, and earn money through it.”

What are the biggest misconceptions that men have about feminism?

“A lot of people think it’s very narrow when it’s quite vast. A lot of what feminism is about is basic human rights. Women should have these rights all over the world. If you believe this, and say you are not a feminist then you are crazy. So there’s that pyramid that says we are all feminists. Then there are divides within feminism. Some women feel it’s fine to use their sexuality for advancement, and others don’t. Like I said, the subject is vast.”

I left Jennifer to play the Millionaire Maker whilst thinking about shoes and spinning a plate of jelly on her head. She cashed in 550th place.